Out of home consumers of ice cream in the United Kingdom are increasingly scooping up unconventional flavors rather than traditional favorites such as vanilla, chocolate and strawberry, according to research by Ercolano UK Ltd. The Brookwood, Woking Surrey-based family-run company markets Amore di Gelato, a super-premium ice cream brand.

According to results from a survey it recently conducted among operators and chefs from dozens of leading hotels, gastro pubs and restaurants across Great Britain, over 70% of the respondents claimed that grape and salted caramel flavors were by far and away more popular than the classic standards.

It just so happens that Amore di Gelato offers Grape ice cream featuring a blend of red grape sorbet and white grape ice cream with pieces of real grape. Developed with partners in Belgium, the product is distributed in 2.4 liter tubs. 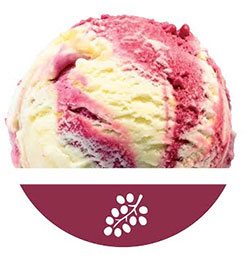 This real grape frozen confectionery is offered to “fill a gap in the market rather than just be ‘another’ ice cream,” says the Amore Di Gelato marketing team.Another emerging trend revealed by the research was a “maturation” of ice cream consumption, as flavors with an alcoholic-twist were boosting sales for a number of high-end establishments. These varied across the country, with northern hotels and pubs serving up the likes of “stout” ice cream, while southern consumers preferred liqueur-spiked treats such as Amoretti Amaretto.

The research also revealed that dessert consumption was up overall, with almost 85% of those questioned stating that ice cream was bought by more than half of all diners. A small number (15%) of those surveyed said that desserts were purchased by at least 80% of customers, indicating that diners are increasingly indulging when eating out.

Mike Godwin, managing director of Amore di Gelato, noting that the research had “wide-reaching” potential for the hospitality industry, commented: “The perception that diners are too health-conscious to indulge in dessert is actually slightly skewed. Our experience says that consumers very much enjoy dessert, but aren’t willing to spend money on low quality products.”

He continued: “Now our research backs this up. The numbers clearly show that offering exciting, modern versions of a classic concept will help dessert sales. This is a key opportunity for operators, who can use this information to develop their desserts sales numbers – an area which can typically offer excellent returns.”

Despite a clear trend towards unusual flavors, high quality vanilla ice cream was cited as a top seller in a number of hotels and restaurants, showing there is still room for the classics.