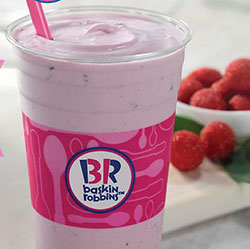 The Greek frozen yogurt treat complements Baskin-Robbins’ range of “better-for-you” flavors that are available at participating stores in the USA this spring and summer, including dairy free, no sugar added, premium churned reduced-fat and frozen yogurt options.

Named as the top ice cream and frozen dessert franchise in the United States by Entrepreneur magazine’s 35th annual Franchise 500® ranking, Baskin-Robbins outlets sold more than 13 million ice cream cakes worldwide last year. The company was founded in 1945 by two ice cream enthusiasts whose passion led to the creation of more than 1,000 flavors.