Just in time for the upcoming winter holiday season in the United States, Ben & Jerry’s and New Belgium Brewing have collaborated to bring out a second malts and hops-inspired frozen dessert. This time it’s Salted Caramel Brown-ie Ale that’s on tap. Distribution of the pint-size limited edition ice cream treat, as well as the bottled beverage, will begin in early November. 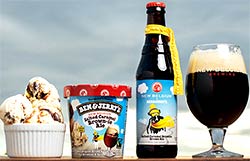 Brewmeisters at Fort Collins, Colorado-based New Belgium Brewing point out that the new ice cream recipe contains only trace elements of alcohol, as ale has not been infused into the product.

“For this particular collaboration, we brewed up something that’s more of a flavor ingredient than something you’d pop open after work,” said Penny Gil-Stuart, special projects manager. “What’s unique is that we were brewing something to share that really tried to speak to the essence of ale, without it really being ale.”

Of course, there no law preventing legal-age drinkers from pairing the ice cream with the libation. In fact, complete with caramel swirls and fudge brownies, the frozen confectionery has been especially formulated for doing just that. 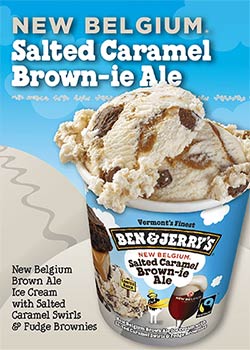 “They have the same flavor profile in that you’ve got caramel and brownies going on in both,” said Bryan Simpson, New Belgium’s public relations manager. “The pour over, which is the best way to experience it, is a scoop of ice cream with ale over it. My inference was it was going to be very sweet – like a root beer float, but the ale is a lot dryer than a root beer would be. The salt plays off the sweet very well.”

The latest special project was under the jurisdiction of “Brewhouse 3,” New Belgium’s mobile, home-brew-scale station utilized from time to time to test-brew small batches. The goal was to create a liquid that could capture the flavor of ale and blend neatly into a bold, flavorful ice cream. The result, exactly 220 kegs of syrup made from pale, caramel, and chocolate malts, plus a hefty dose of Nugget and US Goldings hops to create a thick ingredient that’s both malty and hoppy, was shipped Ben & Jerry’s to star in its Salted Caramel Brown-ie Ale ice cream.

Earlier this year Burlington, Vermont-headquartered Ben & Jerry’s worked with the New Belgium craft beer experts to create Salted Caramel Brownie Brown Ale ice cream which, according to the brewmeisters, serves up: “lip-smacking fun of dessert from a bowl right into your pint glass.” Brewed with specialty ingredients, its rich chocolaty, salted-caramel, vanilla goodness is worth savoring to the last drop.” 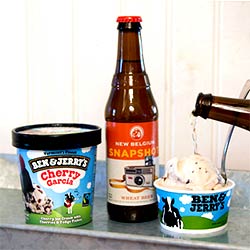 Meanwhile, no doubt after a good deal of arm-bending, glass-emptying research, the two companies have come up with a guide to pair a number of Ben & Jerry’s other signature ice creams with the just right the brew. Here are the recommendations: