Blu Brand Ambassador Hops to it in Blue Bunny Re-launch

Hey Peter Cottontail, Easter’s on it way. What better time then to welcome Blu on the bunny trail!

For over 80 years Blue Bunny has been synonymous with ice cream and frozen novelty product innovation in America’s heartland. The producer, known for playful creations such as Mini Swirls cones and Bunny Tracks ice cream, last week introduced a brand ambassador named Blu. In commemoration of the comprehensive brand re-launch, Blu is debuting in a Blue Bunny advertising campaign that begins on March 14. 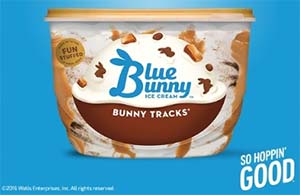 “When people think of ice cream, they think of fun. That’s where Blue Bunny comes in,” said Adam Baumgartner, the company’s vice president of marketing. “We’ve re-launched the Blue Bunny brand, having been inspired by ice cream fans and their desire to have more fun with frozen treats. We asked, and then earnestly listened to ice cream enthusiasts, and we heard them say they want their ice cream to be more light-hearted and more fun. And they want it to come in packaging that clearly conveys there’s good stuff waiting for them inside.

“We poured these consumer insights into our recipe for re-launch,” he continued, “and now Blue Bunny’s improved flavors, shapes and sizes of fun-stuffed ice cream are available nationwide.”

Blue Bunny is bringing more to retail freezer cases in the form of its Funwich, a new fusion of cookie and ice cream. The novelty is a chocolate chip cookie layered with creamy vanilla ice cream, all dipped in a milk chocolaty coating, on a stick.

The ice cream brand has also put a new twist on a favorite novelty, the Mini Swirl. Aptly named the Big Swirl, the new product was created to “bring the ice cream shop dip cone to the grocer’s freezer.” A larger version of the Mini Swirl, it consists of swirls of creamy vanilla ice cream dipped in a milk chocolaty coating, all inside a crunchy sugar cone. 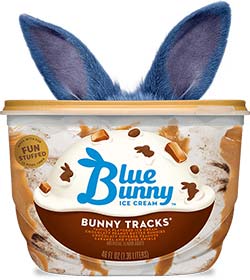 “To meet ice cream aficionados’ demand for more variety of quality, fun-stuffed ice creams, we improved many of our existing ice cream flavors, and created new and equally tasty ones,” Baumgartner said. “In general we stuffed more ingredient pieces and swirled more gooey ribbons into our packaged ice creams. Depending upon the flavor, there’s more pieces of cake, cherries, chocolate chips or pecans. There are more swirls of chocolate, fudge, peanut butter, strawberry or sea salt caramel. And no matter the flavor, all of our ice cream begins with fresh milk.”

About Wells and Blue Bunny