Umami has recently become a trendy term in global gastronomy circles. It is no secret, however, that the subtle “5th Taste” has been present in all cuisines with a time-honored history. Most consumers easily recognize salty, bitter, sweet and sour tastes – but what about umami?

Although accomplished chefs in restaurants often utilize umami ingredients, many culinary novices remain relatively unfamiliar with just how much flavor they pack. All the more reason, then, for students at the Culinary Institute of America (CIA) campus in Hyde Park, New York, to attend a lecture on umami presented by world class specialists Dr. Kumiko Ninomiya, director of the Tokyo-headquartered Umami Information Center (UIC), and Yoshihiro Murata, chef and owner of Kikunoi Restaurant, in addition to Chef Kyle Connaughton, the CIA lecturer of the Culinary Science program.

Meanwhile, frozen food producers, among them Venlo, Holland-headquartered Scelta, are increasingly enhancing the “5th Taste” in recipe dishes. Scelta is a major producer and supplier of mushroom products, and its raw material specialty just happens to be rich in umami.

Umami is a key ingredient for making meals and side dishes more savory and delicious. The word, first coined in 1909 by Japanese chemist Dr. Kikunai Ikeda of Tokyo Imperial University, loosely translates to “deliciousness.” He had succeeded a year earlier in extracting glutamate from kombu.

Students who attended the “CIA briefing” learned that umami is exemplified in the rich flavor of mushrooms, chicken broth, tomatoes and certain kinds of cheese – all of which leave a lasting sensation on the tongue. One of the components responsible for umami taste is the isolated amino acid glutamate. Together with nucleotides such as inosinate and guanilate, glutamate intensifies and harmonizes other flavors while enhancing the complexity of a dish. 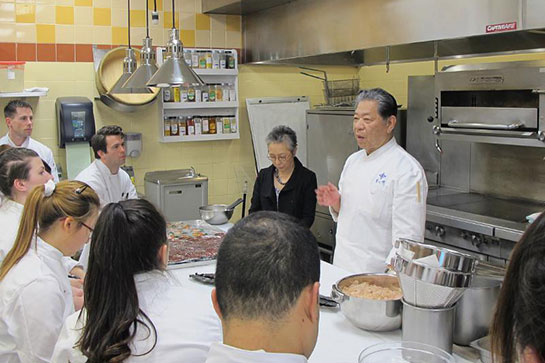 As the third generation owner of the century-old, three-Michelin star kaiseki restaurant Kikunoi in Kyoto, highly accomplished Chef Murata has dedicated his life to teaching the foundations of Japanese cuisine. His message at the packed lecture hall in New York was that Japanese cooking aims for balance, and there is nothing better to achieve this balance than dashi, a soup stock with the clearest umami taste.

Approximately 130 students attended the teach-in, sponsored by the Umami Information Center, to learn all about the science of umami taste from Dr. Kumiko Ninomiya, the director of the UIC, and to study the technique of dashi making in Japanese cuisine with the venerated Chef Murata, who explained that the Kikunoi kitchen uses dashi in all forms of cooking. Dashi is a pure mixture of umami compounds: glutamate from kombu and inosinate of the dehydrated and fermented bonito flakes. This pure and clear umami taste in dashi draws out the original flavors of ingredients without overdoing it.

But umami is not exclusive to Japanese cooking – it’s universal.

Kyle Connaughton, a lecturer at the Culinary Institute and best known for his former role as a head chef of research and development at a three-Michelin star restaurant, The Fat Duck, demonstrated umami taste within the context of American cooking. He explained how the technique of fermentation often used in Japanese cuisine highlights umami taste. The spread of this knowledge has created a new trend among renowned American chefs such as David Chang, whose fermented chickpea paste was inspired by traditional Japanese miso.

CIA pupils sampled a cherry tomato and were then asked to talk about the lingering umami taste. Sophomore Santana Burris described it as “a savory flavor that sort of coats the mouth and throat.”

Students also tasted a number of clear broths. Using a mild vegetable soup with a very low salt content, Dr. Ninomiya demonstrated that a small quantity of the umami seasoning monosodium glutamate is able to intensify the saltiness with a very low final impact on total sodium, one of the health benefits of umami compounds.

Umami makes low salt foods tastier. This has been seized upon by Scelta Mushrooms, which has developed 100% vegetable-based salt reduction ingredients that are complimentary to savory flavors in meat dishes, sauces, stocks and gravies.

Another property of umami that Japanese cuisine has mastered is its complex and somewhat mysterious effect on blending and harmonizing all other flavors. This allows for a rich and satisfying taste without having to rely on fats or oils as other cuisines do. As such, a kaiseki-style bento box from the restaurant Kikunoi that includes 46 different ingredients simmered or marinated in dashi contains just 450 calories, while still imparting all the delicate tastes of seasonal ingredients.

“It’s not only about Japanese food,” said Culinary Institute Dean Chef Howie Velie. “Umami is an important element of gastronomy, even for pastry chefs!”