The PRC halted imports earlier this month from Industrial Pesquera Santa Priscila S.A., Empacreci S.A., and Empacadora Del Pacifico Sociedad Anonima Edpacif S.A. after allegedly finding evidence of novel coronavirus (SARS-CoV-2) contamination on the interior walls of containers in which the companies’ white shrimp was shipped as well as on samples of outer packaging. The shrimp itself tested negative.

But even before the ban, the slowdown in shrimp production in Ecuador was a reality, as reflected in June export statistics that show a drop of 37 million pounds compared to May. 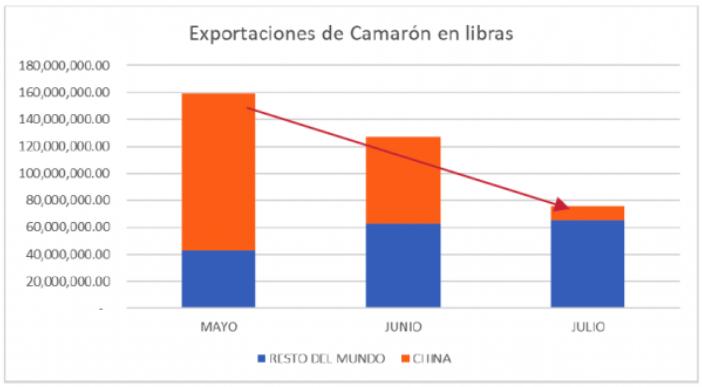 China, which is the main destination for Ecuadorian shrimp exports (62%), also registered a drop in demand. Since May shipments to the PRC amounted to 116 million pounds, while in June CNA’s statistics show a decline to 59 million pounds, a 49% drop.

According to CNA, projections as of July show the contraction is more acute since only 80 million pounds are expected to be exported by the end of the month. “Supply to China is almost non-existent, as only 11 million would be sold to that market,” stated Ecuador’s National Chamber of Aquaculture.

The production data announcement, which was made by CNA President Jose Antonio Camposano (pictured below on the right) together with Iván Ontaneda, Ecuador’s Minister of Production, Foreign Trade, Investments and Fisheries (seen speaking at left) during a press conference, makes it clear that the global economic slump triggered by the coronavirus crisis has had a degree of negative impact “on the breeding and export of crustaceans that has not been experienced in over a decade. 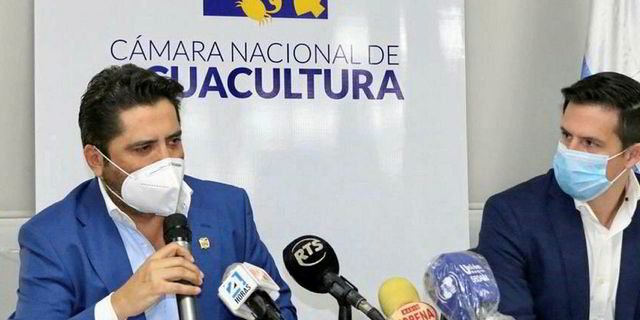 Maturations and larviculture already register a worrying drop in production. The same is palpable at Ecuador’s shrimp farms, where dry pools are evident from the air, a view last seen during the period of the devastating viral white spot disease that began in 1999 and lasted for several years. Currently there are approximately 3,800 shrimp farms occupying 18,500 hectares nationwide.

Added to this scenario is the report by the producer sector of a decrease in stocking densities to avoid greater economic losses that lead to layoffs of the personnel.

Meanwhile, the CNA issued the following statement on July 20:

“Regarding the situation with the Chinese market, the shrimp sector is responding to new demands immediately. Analysis of packing plant personnel has become widespread, as well as the reinforcement of biosecurity measures in the areas of packaging material and containers. In this way, Ecuador is collaborating with the Chinese Customs authorities to the improvement of biosafety processes in this new global context.”

On July 22 the Global Times, a Communist Party publication, reported that Chinese Foreign Ministry spokesman Wang Wenbin told a press briefing on Tuesday that the PRC and Ecuadorian governments have been in close contact through various channels regarding the resumption of export certificate for the banned companies.

It quoted Wang as stating: “Once certain conditions are met, relevant companies will be able to resume frozen shrimp export to China, which will promote the sound growth of China-Ecuador food trade.”