There’s still time to register to attend the China Fisheries & Seafood Expo (CFSE) set for October 30-November 1, but would-be exhibitors that have not yet booked a booth for the 24th running of the annual trade fair will have to wait until next year, as time and available space have run out for the 2019 edition.

Asia’s largest seafood show in the world’s biggest seafood market expects to attract more than 35,000 visitors from approximately 100 countries to the Qingdao International Expo Center, where products and services will be showcased across 47,000 square meters in 10 spacious halls.

“We’re very happy with the continued growth of the China Fisheries & Seafood Expo. This year we moved the show up a week, as overseas exhibitors and Chinese importers asked for more time to receive shipments that they order at the show to arrive prior to Chinese New Year,” said Peter Redmayne, president of Sea Fare Expositions, which has been organizing trade fairs for the seafood industry since 1984.

CFSE was launched in 1996 as a joint venture between the China Council for the Promotion of International Trade Unit (CCPIT-SSA), a division within China’s Ministry of Agriculture, and Seattle, Washington-based Sea Fare Expositions. As the overseas organizer, Redmayne’s company is responsible for recruiting exhibitors and visitors from outside China.

In 2005, Sea Fare Expositions created a wholly-owned foreign subsidiary in Beijing, Sea Fare (China) Ltd., to increase visitor and exhibitor participation among both Chinese and overseas companies with offices in the PRC. 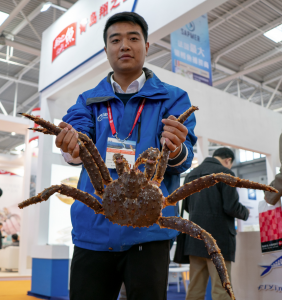 Speaking about the ongoing rise in demand for fishery products in China, much of which is high value shellfish including crab and lobster,  Redmayne commented: I’ve been in the seafood business for almost 40 years, and I’ve never seen anything like it. It’s incredible that a market this big can keep growing this fast.”

Indeed, the value of China’s imports of seafood products during the first half of 2019 reportedly surged by 32% to over US $7 billion. The nation is also a major exporter of fishery products, shipping 4.23 million metric tons to foreign buyers in 2017. During the same year it imported 4.89 million metric tons.