French Fries Galore in Store at McDonald’s in Missouri

Want all-you-can-eat fries with that Big Mac? Starting this July, a McDonald’s franchisee in the “Show Me” state of Missouri aims “to show the way of the future” at a new unit in St. Joseph that will serve bottomless french fries for at least the first two months of operation.

In addition to making unlimited fries available at no extra charge, Chris Habiger’s idea is to offer customized burgers, chicken sandwiches and desserts that can be ordered at kiosks. Diners will be able to enjoy meals in a laid back yet “high-tech” environment outfitted with armchairs and couches as well as a play room equipped with video games and interactive light board tables. 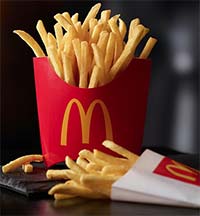 “Today’s customers seek a comfortable and inviting atmosphere, so we’re committed to providing a modern look and feel to this restaurant. Once you’ve placed your order, you can find your seat because we’ll bring the order out to you,” Habiger said during ground-breaking ceremonies for the 6,500-square-foot unit, which will be the largest McDonald’s in the four-state area.

Meanwhile, the world’s largest burger chain seems to have called it a wrap for the McWrap tortilla filled with chicken, lettuce, spring greens, sliced cucumbers, tomatoes and cheddar jack cheese. Phase-out of the product was initiated last year in the United States after both large and snack-size renditions failed to catch fire with healthy-eating millennials, its primary demographic target.

On the new product front, McDonald’s is now test-marketing the Grand Mac and the Mac Jr. at 127 outlets in the Central Ohio and Dallas/Fort Worth area. Bigger beef patties and buns, plus an extra slice of American cheese, are featured in the Grand Mac. The Mac Jr. is a scaled down, single-layer Big Mac.