The answer to “Want fries with that?” asked by wait staff around the world is increasing a positive “yes, ay, ja, si, oui, da” and “dui,” judging by rising sales among the leading producers of frozen potato products. Lamb Weston investors like that, as common stock holders are looking forward to a dividend of $0.1875 per share payable on September 1. 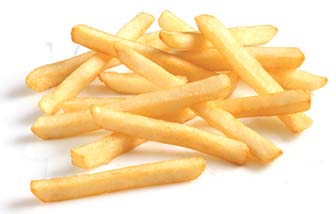 The Eagle, Idaho, USA-headquartered company posted impressive fourth quarter results fueled by strong volume gains, as net sales of $832.5 million were up 7.1%. Income increased 136% to $123 million for the three-month period ending on July 3, 2017, beating estimates by $21.7 million. For the year net sales increased 6% to $3,168 million, while income from operations rose 39% to $518 million.

This was the second full quarterly report from the company since it was spun off from ConAgra last year and began operating independently.

“Looking ahead to fiscal year 2018, we anticipate the operating environment to remain generally favorable, with solid demand growth for frozen potato products across most of our markets,” said Tom Werner, president and chief executive officer. “In addition, we expect the industry’s production capacity to continue to be constrained, especially in North America. We are confident in our ability to build upon the momentum that we have created, leverage our investments in additional capacity to support our customers, execute our strategies and win in the marketplace to deliver on our outlook for the year.”

Investments in boosting output have been significant both in Europe and the United States. Last November the Lamb Weston/Meijer (LW/M) joint venture inaugurated a 250 million pound french fry line at Bergen op Zoom in the Netherlands to support increasing demand on the continent, as well as fast-growing markets in the Middle East.

Meanwhile, Lamb Weston/Meijer’s investment in a joint venture to build a 180 million pound french fry factory in Russia remains on track to open in early 2018. Elsewhere, LW/M is integrating and upgrading a 185 million pound capacity facility in the Netherlands that was recently acquired from Oerlemans Foods.

“We are supporting our customers’ growth through innovation by working with them to expand menu options, increase consumer traffic and drive profitability,” Werner told analysts during an earnings call on July 25. “For example, in North America we are partnering with a national chain as they test a coated french fry product – the first fry product on their menu. In addition, we are teaming up with other national chains on a range of limited time offerings.”

In Latin America, the company recently launched the Waffle-Waffle Fry. The sweet potato-based CrissCut specialty featuring crispy waffle batter is served as an appetizer and side dish, and even utilized as a dessert component.

“In addition, we are partnering with regional fast casual chains with a clean label alternative to their higher cost house-cut french fry,” said Werner. “And in retail, we recently launched the Grown in Idaho brand to complement our licensed brand products, as well as our Alexia premium products.”

The iconic “Grown In Idaho” logo is prominently emblazoned on the line of frozen fries, hash browns and puffs. Distributed in 28-ounce (793-gram) bags at retail stores in the United States, the products are made with 100% real Idaho potatoes.

Robert McNutt, senior vice president and chief financial, reported that overall net sales were up 6% on volume growth of 4% in the fourth quarter for Lamb Weston’s global segment, which is comprised of the company’s top 100 North America-based restaurant chain customers and international accounts. Product contribution margin [gross profit less advertising and promotional expense] increased 10% in the period, primarily driven by favorable volume and price mix. For the year, it was up 16%.

Net sales advanced 9% for both the quarter and the year in the foodservice segment [North American foodservice distributors and restaurant chains outside the top 100 restaurant customer base], which accounted for about one-third of total sales compared with a little for than one-half for the global segment. Product contribution margin in the quarter rose 24%, again reflecting favorable price mix. For the year, the margin increased 31%.

“Net sales grew 5%, and volume was up 7% primarily driven by growth of private label products,” said McNutt. “Price mix declined 2%, largely due to higher trade spending in support of the launch of Grown In Idaho branded products late in the fourth quarter.”

Anticipating average potato crops in both the USA and Europe, the company is targeting net sales to grow at low to mid-single-digit rate in fiscal 2018, although it expects growth in the first half to be relatively modest.

“With respect to volume, we will continue to be capacity constrained until the latter part of the second half when our new french fry capacity becomes available for customers’ growth initiatives,” said McNutt. 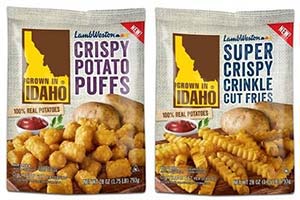 During the question and answer session following the scripted July 25 conference call presentation, Matthew Grainger of Morgan Stanley inquired about the rationale for launching and supporting the Grown in Idaho retail range during a period of constrained capacity, given the trade spend incurred and somewhat below average EBITDA margins in the retail segment.

Werner replied that the launch was a strategic initiative to round out the company’s retail presence with a mid-tier offering positioned between private labels and Lamb Weston’s premium Alexia brand range.

“It’s going pretty well and it’s off to a pretty good start,” he added. “In terms of capacity, that particular product runs on a very different part of our asset base. While we talk about running all the plants wide open, that’s an area where in the line flow where we did have some opportunity. So it’s not compressing the system, so to speak, in terms of taking away from any other part of our business. It’s just an opportunity for us to expand, which our customers have welcomed.”

[Author’s Note: FrozenFoodsBiz.com thanks Seeking Alpha for providing a transcript of Lamb Weston’s July 25 earnings call. Readers who want to review the full text may do so by visiting www.SeekingAlpha.com.]