How McSweet they are, but not for long. After launching Hokkaido Milk Pie desserts at McDonald’s restaurants throughout Japan on March 29, the popular limited edition product is scheduled to be removed from the menu by the end of April, bar a stampede of “Nos,” or perhaps “Moos,” from consumers who demand that the tasty treat remain available.

Selling for ¥120, the pie features a cream filling made from milk sourced from Japan’s northernmost prefecture, Hokkaido, which is highly regarded for production of dairy products. This addition to the McDonald’s McSweets range, which spotlights products featuring specialty ingredients from various regions of Japan, was coupled with the introduction of Uji Matcha Azuki McFlurry. Priced at ¥280, it features Hokkaido beans and powdered green tea sauce from Uji on the southern outskirts of Kyoto.

In 2013 McDonald’s Japan released a limited edition Matcha Oreo McFlurry, which combines matcha, vanilla ice cream, and chunks of Oreo chocolate cookies. It made an encore appearance in 2014. 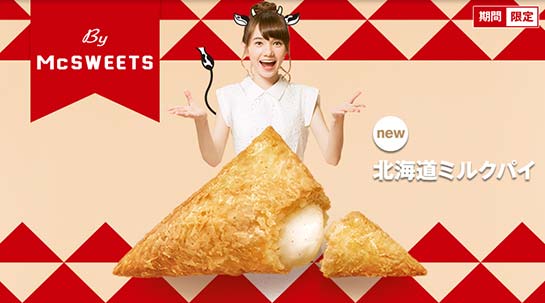 Meanwhile, the release of McDonald’s results for the first quarter ending on March 31 showed that comparable revenues rose 11% in Foundational markets, primarily due to sales recovery in Japan. Quarterly operating income increases for both Japan and China reflected strategic charges and recovery from the prior year’s impact of food safety-related supplier issues in 2014, which negatively impacted performances in those countries during the first quarter 2015.

Global comparable sales for the first quarter showed an uptick of 6.2% and an international lead segment advance of 5.2%, driven by strong results in the UK, Australia and Canada. In the United States, revenues increased 5.4%, fueled by the popularity of All Day Breakfast offerings and the introduction of McPick 2 – a branded national value platform.