Outside on the sidewalks of New York the temperature was sizzling at 96°F. Inside the comfortably cool confines of the Javits Center the “heat” was mild to medium in four new Frontera Taco Bowls served up at Booth #5636 during the three-day Summer Fancy Food Show in Manhattan that concluded on July 2.

“We’re expanding our range of authentic flavors of Mexico offered to consumers at freezer aisles in retail stores across the United States for convenient, quick preparation at home,” said Conagra Culinary Director JeanMarie Brownson, who has overseen gourmet Mexican cuisine product development with Chef Rick Bayless since the Frontera brand’s inception in 1996.

Chicago-headquartered Conagra acquired Frontera two years ago and extended the brand, which was firmly rooted in salsas and sauces popularized by Chef Bayless, to the frozen food sector in 2017. Frontera Especial Tequila Borracha Salsa was a Sofi Award winner at the Summer Fancy Food Show, which is organized by the New York City-based Specialty Food Association (SFA). 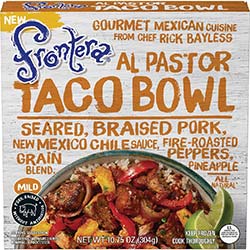 Larger 20-ounce multi-serve gourmet Mexican Taco Skillet versions of Chicken Verde and Chicken and Chorizo have also been rolled out under the Frontera banner recently, as well as a Veggie and Bean offering. They join five other meals for two persons that typically retail for $7.99 to $8.99 apiece.

Fully cooked, big and bold flavors in bowls and pouches that contain top quality ingredients to meet the discerning specifications of an evolving cuisine of contemporary Mexico is what the Frontera portfolio is all about, said Brownson. Each dish is conveniently ready to eat in 10 minutes or post-freezer preparation. Reducing the time needed to prepare and serve the dishes is very important, as many consumers today are increasingly crunched for time, she explained.

Show-goers looking for dessert at the Fancy Food Show would have fared well by visiting the Humphry Slocombe Ice Cream stand to enjoy a sample of Black Sesame Ice Cream from the San Francisco-based company. The tasty treat won a Gold Sofi Award in the Ice Cream, Gelato and Frozen Treat category. 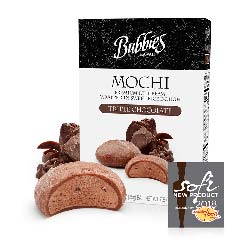 Another good choice would have been Bubbies Mochi Ice Cream Triple Chocolate, which received a New Product Sofi Award and was enthusiastically sampled at the exhibition. Made in Aiea, Hawaii, the frozen confectionery features a smooth blend of chocolate ice cream with premium chocolate chips enrobed in chocolate mochi rice dough.

Bubbies Ice Cream & Desserts was founded in 1985 by Keith Robbins, who opened his first ice cream parlor a few blocks from the Manoa Campus of the University of Hawaii, in Honolulu. The business was acquired by Chicago-based Kennex Holdings in 2017 as its second frozen food product investment after the purchase Imperial Frozen Foods in 2013.

The 64th running of the Summer Fancy Food Show profiled plenty of other frozen products at the stands of 2,400 exhibitors from 54 nations from around the world that displayed more than 200,000 specialty food items in space occupying the equivalent of six football fields.

The late Paul Prudhomme of Magic Seasoning Blends, who did so very much to popularize Cajun and Creole cuisine throughout the United States and beyond, was honored during the show by the Specialty Food Association along with Seymour Binstein, the founder of European Imports and a pioneer in specialty foods sales and foodservice distribution in America. Both entered the pantheon of Lifetime Achievement Award recipients.