As the old novelty song goes: “I scream, you scream, we all scream for ice cream.” Now, perhaps in India the words “and frozen desserts made of vegetable oil fats” should be added to the lyrics. 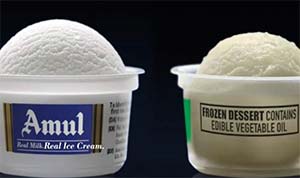 GCMMF contended that its ads do not denigrate Hindustan Unilever’s frozen desserts, but merely inform consumers that frozen desserts contain vanaspati, or vegetable oil as defined by the Oxford dictionary.

“Once HUL says vegetable oil is healthy, then the ad cannot be said to be disparaging,’’ argued the Amul brief presented by Ravi Kadam. “We are entitled to show the difference between ice cream and frozen dessert. Ours is an ice cream made only of milk and there is a frozen dessert which also contains vegetable oil.’’

Biren Saraf, counselor for HUL, rejected Kadam’s argument. “In the pretense of educating the public, Amul is indulging in a false and vicious campaign against Kwality Wall’s,” he asserted.

Agreeing with Saraf’s assessment, the Bombay High Court declared that Amul “knowingly denigrated” an entire category of frozen desserts, thereby impacting HUL, which is the market leader in India’s frozen desserts category. The Court held that the fundamental right to free speech must not be abused to malign, discredit or belittle a rival manufacturer’s product through a negative campaign.

Justice S. J. Kathawalla opined that the commercial’s voiceover commentary, along with visual imagery, intentionally conveys that large quantities of vanaspati go into the production of frozen desserts. Amul provided no justification for the visual impact of the advertisement and why, originally, only the term vanaspati had been used, he said.

Kathawalla ordered an injunction against the Amul ice cream advertisements that “disparaged frozen desserts.” He added, in no uncertain terms: “The question of granting any stay on the order does not arise. The application for stay is therefore rejected.”

In an 87-page judgment, the judge commented:

“I have considered the content, intent of the commercial, manner and storyline of the commercial and the message sought to be conveyed by the TVC in totality, and it has become crystal clear that the same are shown with the sole intention of disparaging the entire category of frozen desserts… It can be clearly seen that the message that is sought to be given is that all frozen desserts contain vanaspati/vegetable oil, and that all frozen desserts are necessarily unhealthy and harmful and should not be purchased and consumed.”

Kathawalla concluded that repeated broadcasting of commercials containing “wrong information” created confusion and apprehension among consumers, and hence the negative campaign against rival companies must cease.

It should be noted that Kwality Wall’s, nor any other brands, were mentioned in the TV ads. Hindustan Unilever successfully argued, nonetheless, that as the largest frozen dessert producer and marketer in India it was directly targeted and affected by Maul’s campaign.

“We are pleased that the Bombay High Court while injuncting the advertisement has agreed with our contention that Amul’s advertisement is false, misleading consumers and disparages frozen desserts,” stated Sudhir Sitapati, executive director-refreshments at Hindustan Unilever. “Kwality Wall’s products are made with milk/milk solids and do not contain vanaspati (a hydrogenated vegetable oil used in cooking). In fact, our frozen dessert products use milk without cholesterol to offer healthy and exciting choices to consumers.”

For the record, the Food Safety and Standards Authority of India (FSSAI) has classified ice cream as “dairy-based desserts/confections,” which are categorized as plain, medium fat and low fat depending on the percentage content of total solids, milk fat and milk protein.

“Frozen dessert/frozen confection” is defined as a product made by freezing a pasteurized mix prepared with milk fat and/or edible vegetable oils and fat.

Sales of non-dairy frozen desserts have reportedly been growing at an impressive rate of 10-12% per annum in recent years. It is estimated that such products now account for approximately 40% of the Rs. 1,800 crore market for frozen confectionery in India. 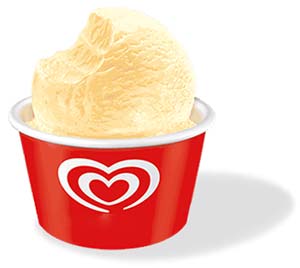 In the wake of the Bombay High Court’s decision to stop GCMMF from telecasting misleading Amul advertisements disparaging the frozen desserts category, HUL has posted a list of frequently asked questions and answers about frozen desserts and ice creams. An edited version appears below.

Do Kwality Wall’s products have milk in them?
Yes, they contain milk/milk solids.

Do Kwality Wall’s products have Vanaspati in them?
No.

How is vanaspati different from vegetable oil?
Vanaspati means any refined edible vegetable oil subjected to the hydrogenation process. Vegetable oils have lower saturated fat and no trans-fat unlike fanaspati.

Why do you call Kwality Wall’s products healthier?
Frozen desserts are healthier than ice cream in terms of fat content since frozen desserts contain vegetable fat, which is naturally cholesterol free, has less saturated fat content when compared with dairy fat.

Why does Kwality Wall’s use vegetable fat?
This is because we are committed to offering consumers great tasting and healthier products.
We use vegetable fat since it is naturally cholesterol-free source of fat; contains lower saturated fat than dairy fat. This makes our products healthier than other ice creams.

Are Kwality Wall’s desserts more fattening than the other ice creams?
No, our global technical expertise has helped deliver products with better nutrition profile without compromising on taste. The calories of our frozen desserts are lower than traditional desserts on weight-by-weight basis and have more healthy fat profile.