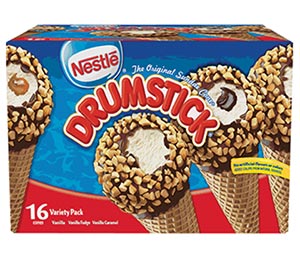 The ice cream novelty items were “put into distribution inadvertently” after equipment contact surfaces at a location on the production line where these products are made tested positive for Listeria monocytogenes. There have been no such test results for the pathogenic bacteria that cause the infection listeriosis present in the Drumstick cones themselves.

No illnesses have been reported to date, as Nestlé carries out the recall as a precautionary measure to avoid any potential for consumer illness.

Listeria monocytogenes can cause serious and sometimes fatal infections in young children, frail or elderly people, and others with weakened immune systems. Although healthy individuals may suffer only short-term symptoms such as high fever, severe headache, stiffness, nausea, abdominal pain and diarrhea, Listeria infection can cause miscarriages and stillbirths among pregnant women.

How Did this Happen?

In a posting at the Nestlé USA website, the company explained that it regularly conducts a “test and hold” program, and identified this potential problem through its own testing protocol. Unfortunately, an error occurred in logging receipt of the test result and the products in question were inadvertently shipped to retailers. As soon as the error was identified, the US Food and Drug Administration (FDA) was notified and the recall was triggered.

Nestlé is now looking into reinforcing routine checks and balances so that such errors do not reoccur, while also investigating the root cause of the finding.

The company has made it clear while both listeria and ice cream are involved in this incident, the reason for its recall differs significantly from the Blue Bell ice cream recall earlier this year.

“Each recall has its own unique facts,” announced Nestlé at its website. “Except for the coincidence that our recall involved both ice cream and listeria, our situation is much different from Blue Bell’s in a number of significant ways, including: we have received no reports of human illnesses; we have no listeria findings in the ice cream itself (just the equipment); we have only one product line affected; we have only one facility affected; and we self-identified this event and took precautionary steps to recall product.”

Nestlé says there may be a temporary shortage of these products as its retail customers remove the recalled items from freezer cases and the distribution channel is cleared of affected products.

Consumers in possession of any of the products subject to recall should not consume them, but instead should return the items to the place of purchase or contact Nestlé Consumer Services for replacement. They are invited to call or text 1-800-681-1676, or communicate via e-mail: Nestleproductinquiry@casupport.com