With the American football season having kicked off and now in full swing, MorningStar Farms has teamed up with actor and singer Tahj Mowry to publicize its plant-based appetizers, meal starters and other convenience products. Among recently launched items in the Kellogg Company division’s range of vegan and vegetarian offerings are frozen Veggie Chorizo Nacho Bites and Veggie Chik’n and Cheeze Taquito Bites.

In championing the many ways football fans serve their favorite plant-based game day eats, MorningStar and Mowry are asking them s to share “MVPs,” aka – the MorningStar Farms Veggie Plays they pull off the bench to feed guests at every football bash.

“I’m a big football fan and love hosting tailgating parties, but I also try to maintain a healthy diet and lifestyle by eating plant-based food as often as possible,” said Mowry. “MorningStar Farms is my go-to for game-day eats because I can enjoy my favorite tailgating dishes the veggie way. This is why I’m thrilled to partner with them to rally football lovers everywhere to share their MVP, so everyone can share the veggie play they turn to for a touchdown on game day.” 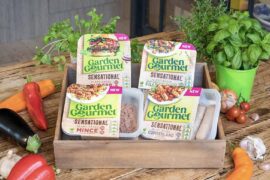