Thai Union, a major supplier of frozen and canned shrimp and fish products to global markets, announced on September 30 that it is introducing a more stringent business ethics and labor code of conduct with higher levels of accountability and transparency throughout its supply chain. It will apply to all units, replacing the 2013 code of conduct concerning labor practices.

The Bangkok-headquartered company’s code of conduct is built on 12 fundamental principles designed to reinforce a culture of integrity, and is aligned with the United Nations global compact principles of basic responsibilities to people and upholding their basic rights. The revised code focuses on the recruitment and treatment of workers stipulating protocols on employee welfare, benefits, wages, age, the right to freedom of association, the right to collective bargaining, and non-negotiable frameworks for health and safety. Like its 2013 predecessor, the new code has a zero tolerance policy for human rights violations in the supply chain.

He continued: “In recent years, we’ve seen too many instances of human trafficking and labor abuses coming from many parts of the world – it’s unacceptable. We hope others will join us to demand an end to labor abuses.”

Chansiri said the new code is just one of numerous efforts being employed to ensure a supply chain free of human rights violations. For example:

The business ethics and labor code of conduct applies to all majority-owned companies within the Thai Union group, and will be rolled out with implementation and auditing plans. In addition, by the end of 2015, employees at every Thai Union manufacturing site in Thailand will be trained on compliance with the new code. 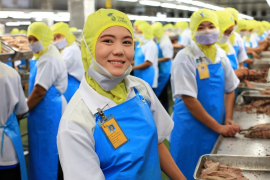