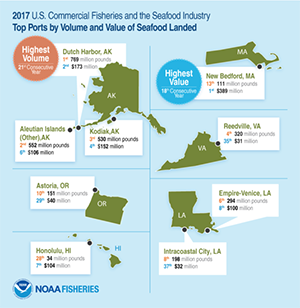 Fishing and seafood consumption in the United States increased in 2017, with landings and value of US fisheries continuing a strong, positive trend. Across the nation, American fishermen landed 9.9 billion pounds of fish and shellfish, while the US imported 5.9 billion pounds of seafood, up 1.6 percent. The landings represent an increase of 344 million pounds (3.6 percent) from the year before. The value of the landings also increased to $5.4 billion, up $110 million (2.1 percent) from 2016.

This Fisheries Economics of the United States, 2016 report provides the most up-to-date economic statistics on commercial and recreational fisheries as well as seafood-related businesses for each coastal state and the nation. A key piece of the latest report is the jobs, sales, income, and value added to the Gross National Product (GDP) by the fishing and seafood industries. This provides a measure of how sales from commercial and recreational fishing ripple through state and national economies as each dollar spent generates additional economic effects.

The commercial fishing and seafood industry – harvesters, processors, dealers, wholesalers and retailers – supported 1.2 million jobs in 2016, generating $144 billion in sales impacts and adding $61 billion to the GDP. The domestic harvest produced $53 billion in sales, up 2 percent from 2015, and supported 711,000 jobs across the entire American economy. American lobster and sea scallops had the largest revenue increases, with each product up $46 million in revenue in the past year.

About NOAA
NOAA Fisheries, also known as the National Marine Fisheries Service, is an office of the National Oceanic and Atmospheric Administration within the Department of Commerce. Headquartered in Silver Spring, Maryland, it has five regional offices, six science centers, and more than 20 laboratories around the United States and US territories.

The agency is responsible for the stewardship of the nation’s ocean resources and their habitat. US fisheries are among the world’s largest and most sustainable. 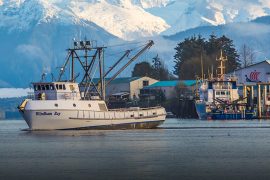