Frozen prawn and shrimp products have been popular among consumers in Britain for some time thanks to their affordability. However, as increasing numbers of people are now focusing more on their health following the Covid-19 pandemic, it is gaining further momentum along with the overall seafood category in general.

According to Seafish’s Seafood in Multiple Retail 2021 Update), the value of total seafood in the United Kingdom was worth £164 more last year than total red meat and £890 million more than poultry – the nearest competitive sector – and this gap is widening.

The number of unit sales has continued to grow across all protein categories, including frozen and chilled seafood, with warm water prawns featuring in the top ten species in the decade through June 19, 2021. What are normally considered traditional species, such as cold water prawns, are conversely showing the highest long-term decline in consumption.

Although the average seafood consumer is prioritizing taste and quality over price, the significant long term inflation (38%) recorded in this area will undoubtedly impact on sales. Cold water prawns have experienced some of the highest inflation over the past 10 years, which has seen a fall in sales. However, the farm-raised warm water species market has experienced an increase in consumption despite double digit price increases.

“If recession begins to bite in 2022, expect initial price sensitivity, but a repeat of 2008 recession habits will see seafood shoppers refocus on taste, quality and health to meet their value for money expectations,” predicted Richard Watson, market insight analyst at Grimbsby, England-based Seafish (formally known as  the Sea Fish Industry Authority). “Frozen seafood consumption briefly outstripped chilled for the first time since 2005 and the struggling ambient (canned and shelf stable), saw a +117% boost as shoppers prioritized cupboard and freezer staples.”

Sales of frozen coated value added products, such as breaded and battered prawns, remained robust throughout 2020 – no doubt driven by value and quick serve meal solutions.

“By the end of March 2021 seafood sales remained elevated, but sector trends show signs of returning to ‘normal’ patterns as with chilled in returning to dominance and frozen/ambient sales either slowing or in decline,” said Watson. “Species often enjoyed in foodservice such as scampi and langoustine also saw significant growth as foodservice outlets remained closed.”

According to Statista, the value of scampi sold in the United Kingdom amounted to approximately £78 million in 2021.This constitutes an increase of approximately thirteen million kilograms in comparison to the previous year.

“Scampi is part of our British culinary heritage with over a million portions of Whitby Scampi being eaten each week,” said Sophie Pogson, senior marketing manager at Whitby Seafoods. “It’s a product which offers consumers comfort and provenance as well as British seaside nostalgia. Not only that, due to its frozen nature it’s extremely versatile, allowing for portion control in the foodservice landscape as well as flexibility for in home usage.”

Whitby Seafood supplies most major supermarkets in addition to the majority of out of home establishments such as pubs and restaurants, as well as wholesales and independents. All its scampi is made using langoustine caught in the waters around the British Isles. 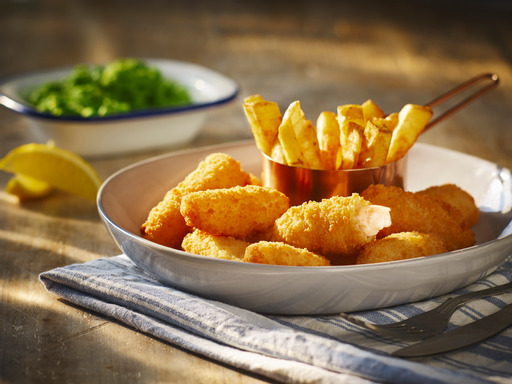 Shopping ethically and sustainably is increasingly important to consumers, particularly when it comes to eating seafood. In fact, shoppers in the UK and Ireland spent £1.26 billion on Marine Stewardship Council (MSC) certified sustainable fish and seafood last year.

The MSC UK and Ireland Market Report 2021 highlighted the importance of the MSC label as the volume of frozen product sales grew by 24% in 2020, while sales of chilled, food-to-go, fish counter and foodservice products all decreased.

According to the report: “MSC labeled cold water prawn sales have continued to rise with the species available in both chilled and frozen formats and in popular food-to-go or ready meals like prawn toast, prawn sandwiches and prawn cocktail.

There is no shortage of prawn products in supermarket freezers. Aside from the peeled, cooked and raw prawn packages, flavored prawns are also increasing in variety as more and more consumers buy into the convenience that is offered.

Sainsbury’s responsibly sourced Garlic and Herb Raw Cooked and Peeled King Prawns, for example, are a quick and simple meal option priced as a reasonable £3.25 per 180g package. Other flavors in the marinated prawn range includes chilli and coriander. 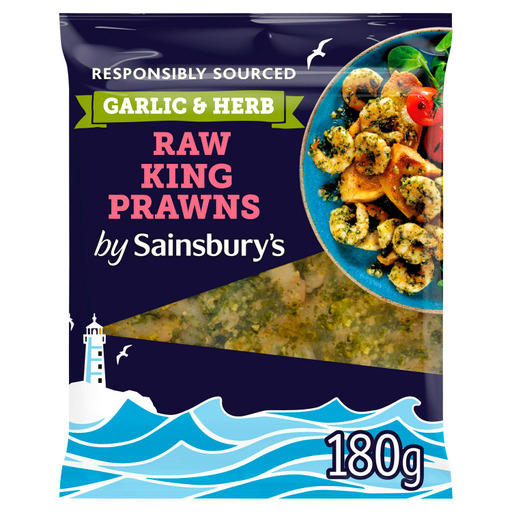 Morrisons also stocks Garlic and Herb King Prawns, priced at £3. Asda sells a Soy, Ginger and Chilli variant at the same price point, and Tesco has a Raw Chili and Lime Marinated King Prawns offering for £3.25. Although supermarkets only offer one or two variants of marinated prawns, sales are sure to increase as the barbecue season warms up.

A staple throughout the retail and foodservice sector are coated prawn products. All the supermarkets off the basic tempura battered prawn offerings, while the foodservice sector has a slightly more diverse assortment on the menu.

Also available for the foodservice sector is Whitby Seafoods’ Bubble Bobble Argentine Red Shrimp (pictured  directly below the main headline of this story), a large and meaty shellfish with a delicate and rich taste that’s not too dissimilar to lobster.

Although there has not been a great deal of innovation in prawn products in recent years, consumers remain interested in the sector, which offers value and ease.