It is with deep disappointment that those of us in the frozen food fraternity missed seeing old and new friends at the SIAL in Paris, which had been scheduled to take place from October 18-22. This was the first time since debuting in 1964 that the show did not go on.

The biennial food fair, like so many other exhibitions and life as we used to know it in general, was victimized by the ongoing novel coronavirus (SARS-CoV-2) pandemic that originated in Wuhan, Hubei, China late last year and continues to wreak havoc around the world. As of October 20, according to figures from the Centers for Disease Control (CDC), the bug has infected more than 40 million human beings and been attributed to the deaths of 1,119,283 people.

The cost to the global economy exacted by government-imposed recessions or worse caused by lockdowns is thus far incalculable. Frozen food manufacturers, however, have been crunching the numbers. Those overly reliant on catering to foodservice customers have been especially hard hit, as restaurants and other group feeding venues have been forced to close, reduce operating hours and/or restrict dining room traffic. Producers more engaged in selling to supermarkets, grocery stores and other retail outlets, on the other hand, have benefited from rising sales as meal occasions at home have increased dramatically.

At the time of this writing, prospects for a quick foodservice sector recovery to pre-pandemic levels remain highly problematic in Europe, North America and other parts of the world, as recent upticks in reported coronavirus outbreaks are prompting government officials to dial back previously loosened lockdown restrictions and again stiffen restrictions on freedom of movement.

Authorities in France have reported that more than 20,000 new cases of coronavirus per day last week were recorded. In Paris, La Ville-Lumiere (the “City of Light”) is again dimming early, as restaurants, bars, theaters and other social gathering places are required to close by 9 PM in an effort to curtail mingling among people who might unknowingly spread the virus.

In neighboring Belgium, where Health Minister Frank Vandenbroucke has proclaimed that a Covid “tsunami” is striking the nation, all “non-essential” hospital procedures are being put on hold for the time being.

In the United Kingdom, Prime Minister Boris Johnson has declared a higher alert level and the imposition of Tier 3 restrictions on the Greater Manchester region beginning at midnight on October 22. Daily cases of Covid-19 in Britain have spiked during the past week, with the total death count approaching 44,000 since the pandemic raised its ugly head there.

In the southern Campania area of Italy a nighttime curfew will go into effect this weekend, and in Germany the Bavarian district of Berchtesgadener Land has gone into lockdown. Meanwhile, the municipal government of Berlin is now requiring the wearing of facemasks at markets.

Commerce and life in New York City, the epicenter of the coronavirus carnage in the United States, continues to suffer as inept leadership at both local and state levels – but let’s not delve too deeply into the bottomless pit of politics at this trying time. After restaurants were shuttered except for takeout service in March, when sales had already plummeted by 77%, indoor dining in NYC was permitted again on September 30. But this is on a limited basis that stipulates maximum occupancy of 25%, no bar service and a mandated midnight closing time.

For many operators struggling to remain in business, such severe restrictions amount to a recipe for financial failure, as they insist economies of scale will not work unless at least 50% capacity is allowed right away, and raised significantly higher by the Thanksgiving holiday (November 26).

Hundreds of New York City restaurateurs and foodservice workers held a wake for their industry in protest of Covid-19 restrictions late last month. They marched on Governor Andrew Cuomo’s office in Manhattan, complete with the somber droning of bagpipes and a mock coffin inscribed with the words: “Here Lies NYC Hospitality. Died in 2020.’’

“We’re not surviving, we’re dying,’’ said Patrick McNamee, who owns the Mean Fiddler Irish pub and restaurant in the Times Square Theatre District with his brother Patrick. “By January 1, I guarantee you that 60 to 65 percent of the restaurants in the city are finished.”

The Mean Fiddler will close its doors even sooner, by the end of October in fact, as less than $1,500 in daily receipts and losses of $10,000 a week at the West 47th Street venue are not sustainable. How really sad it is that happy hours and the great bar food menu at this popular watering hole and eating place will soon fade to black and likely never come back. 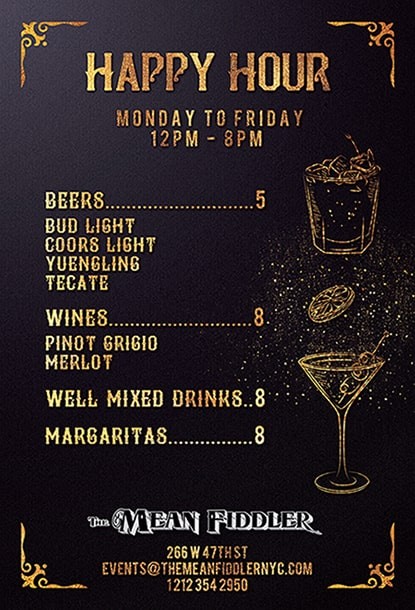 It is estimated that nine out of ten of restaurant operators in Gotham are currently unable to make monthly rent payments. The New York Restaurant Association says that more than 150,000 jobs have already been lost in the sector. On the bright side, beyond New York things may be looking up. Moody’s Investors Service adjusted its rating for the ailing sector from “negative” to “stable” on October 19, citing a growing willingness to dine out among Americans.

“The stable outlook for the US restaurant industry reflects slowly improving business conditions over the next 12 to 18 months, as restrictions implemented to curb the spread of the coronavirus are slowly eased and customers gradually return to dining out,” said Moody’s Vice President Bill Fahy.

Indeed, consumers are hungry and eager to return to restaurants and are doing so with various degrees of cautious enthusiasm. The key to reinvigorating or jump-starting the industry before the pandemic is behind us is to heighten confidence among diners that maximum efforts have been made to assure their safety. This should go far beyond body temperature checks upon entering the premises, mandatory mask wearing while walking to and from tables, and vigorous hand washing.

Technology advances could be part of the answer.

Fugaku “Faces Up” to the Challenge in Japan

In Japan, where restaurant and bar owners are struggling to make ends meet during the Covid-19 health crisis as much as their counterparts elsewhere on the planet, researchers have plugged into the Fugaku supercomputer to help fashion a wrap-around face shield that can be worn to block airborne droplets and thus reduce exposure to the coronavirus while dining out. The collaborative project has brought together the brain power within the RIKEN Center for Computer Science, Suntory Liquors Ltd. and Toppan Printing Co. 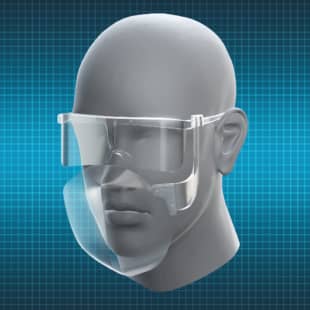 “Our brands have grown into what they are today thanks to the foodservice industry,” said Suntory Liquors CEO Kenji Yamada. “Together with restaurants and bars, Suntory has contributed to cultivating the food and beverage culture in Japan and we have been considering how we can best support this industry, which is one of the most heavily impacted by the pandemic.”

Making use of the new supercomputer Fugaku, which is scheduled to be fully operational in 2021, RIKEN has been conducting the world’s largest ever virus droplet simulation, according to a press release issued by Tokyo-based Toppan Printing Co. Utilizing the results of this highly accurate research on “Prediction and Countermeasure for Virus Droplet Infection under the Indoor Environment,” Suntory and Toppan are developing a face shield and assessing its actual practicability by testing in restaurants and bars.

“Toppan has been engaging in a range of activities to address the social issue of the novel coronavirus pandemic. We intend to contribute to wider society by making the final design for the face shields available as open data to enable anybody in the world to produce and use them. We hope that this initiative can help revitalize the foodservice industry,” said Makoto Arai, director and senior managing executive of Toppan’s Information and Communication Division.

Let’s hope that soon we can drink and eat to the practical success of this “Society 5.0” project, which incorporates advanced technologies in diverse industries and social activities to foster innovation that creates new value. 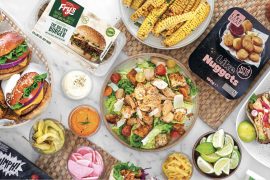 Iceland ‘Doubles Down’ on Vegan Range with Livekindly Brands 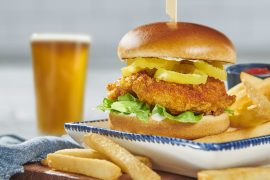 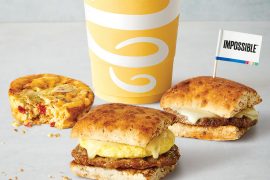