US Baseball Fans on Deck to Eat 19.4 Million Hot Dogs

Play ball! Winter’s over and spring is in the air, at least according to the calendar. This means it’s baseball season again in the United States. And as it was a pretty cold day when the New York Yankees played their home opener against the Houston Astros on April 5 (and, unfortunately for local fans, lost by a 5-3 score), hot dogs were a hot seller at Yankee Stadium.

Known as frankfurters in some quarters, hot dogs are the quintessential ballpark food in North America, and the Washington, DC-headquartered National Hot Dog and Sausage Council (NHDSC) estimates that baseball fans will consume at least 19.4 million of them and over 4.3 million sausages during the 2016 Major League Baseball (MLB) season. The combined hot dog and sausage total could stretch from Tropicana Field in Tampa Bay, Florida, to Angel Stadium in Anaheim, California. The hot dog total alone would reach as high as 5,425 One World Trade Centers, the tallest building in the United States. 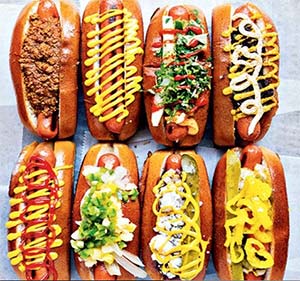 “There are challengers galore, but hot dogs remain king of the concession stand,” said NHDSC President Eric Mittenthal. “From childhood through old age, there are two things guaranteed to put a smile on the face of Americans: baseball and hot dogs. It’s the perfect combination.”

The Los Angeles Dodgers can relish in victory as the team’s fans are once again projected to consume the most hot dogs, totaling over 2.6 million – a jump of more than 100,000 from last year. That is enough to round the bases at Dodger Stadium 3,693 times, and based on last year’s attendance, means that nearly 70 percent of fans at Dodger home games will eat a hot dog.

The New York Yankees have again claimed second place, as fans are expected to consume more than 1.55 million hot dogs. Batting third are the Cleveland Indians at 1,252,463 hot dogs, followed closely behind by the Texas Rangers with 1,206,780 anticipated hot dog sales. The Chicago Cubs round out the lineup of heavy hitters, with fans expected to consume more than 1,000,000 hot dogs, representing a 17 percent increase over last year.

While perennial hot dog favorites remain staples at ballparks across America, teams are introducing new creations that are sure to be all-stars. With so many new options, the NHDSC launched a new guide highlighting photos and descriptions of this season’s most unique hot dog and sausage offerings, along with a sampling of classic favorites. 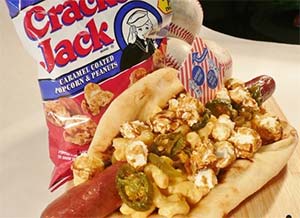 Cracker Jack & Mac Dog: Pittsburgh Pirates fans will no longer have to choose between two of baseball’s most cherished foods: Cracker Jacks and hot dogs. This creation, offered by Aramark, features a hot dog topped with Cracker Jacks, mac and cheese, salted caramel sauce and fried jalapeños on naan bread. 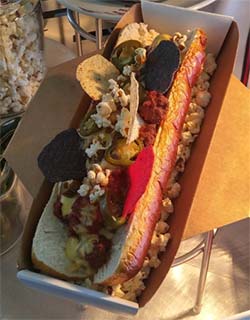 Atlanta Braves supporters may want to come to the game extra hungry to eat this standard foot-long hot dog, layered with fries, chili, nacho chips, beer cheese and jalapenos, topped with popcorn and a Coca-Cola-infused BBQ sauce served in a pretzel bun.

Cheeseburger Dog: Arizona Diamondbacks fans can indulge on this hot dog made of char-grilled hamburgers that have been ground up and mixed with chopped smoked bacon, green onion and cheddar cheese. They are then breaded with milk and flour, deep-fried and served on a bun with smoked bacon and secret sauce.

“The hot dog and sausage innovation at ballparks is truly amazing,” said Mittenthal. “Just a few years ago, macaroni and cheese or pulled pork were considered unusual hot dog toppings, but today almost anything goes.”

Another trend is local hot dogs such as at Wrigley Field in Chicago where Cubs fans can enjoy new hot dogs and sausages from local favorite Hot Doug’s and Gilbert’s Craft Sausages, while the Washington Nationals are debuting a stand from local restaurant Haute Dogs and Fries, and the Cleveland Indians will feature hot dogs from Happy Dog, including one topped with Fruit Loops.

One hot dog more stadiums might consider in the future is the West Virginia Dog, the newly crowned 2016 Hot Dog Madness regional hot dog champion. Following more than three weeks of spirited competition, West Virginia successfully defended its title as the best regional hot dog, managing to thwart a strong challenge by the Seattle Dog, which struck out in the bottom of the ninth to wind up with second place. The New York and Chicago dogs rounded out the final four.

The West Virginia Dog features chili, mustard and coleslaw on a steamed bun. Enthusiasts chose it by voting on the NHDSC Facebook page in a bracket style contest featuring 16 different regional hot dogs from the he North, South, West and Midwest.

“West Virginia fans are very passionate about their hot dogs and for the second time, let their voices be heard to help crown our winner,” said Mittenthal. “While the regional dog debate has been settled for this year, we know other areas will be rallying their fans to support their dogs next time around.”