As the main vegetable campaigns come to an end, the European Association of Fruit and Vegetable Processors (PROFEL) is drawing attention to the adverse weather conditions over the past three years that have significantly impacted frozen and canned production throughout the EU. The Brussels, Belgium-based trade group says that 2018 has been the worst year in four decades for the vegetable processing sector, though the severity of harvest shortfall has varied by crop and region.

A very wet winter and spring, destructive storms and an extended heat wave with long drought have affected many production areas on the continent. However, the impact has been less severe in some locations of Southern Europe.

In general, several crops “have been affected with heterogeneous consequences, depending on the product and the production region,” reported PROFEL in an assessment issued on November 23. For example:

The situation is also severe when it comes to other autumn vegetables. Yield reductions are confirmed for carrots, broccoli, beetroot, celery, celeriac, onions and courgette (zucchini), spinach, leek, and Brussels sprouts. For onions the losses in Europe are dramatic, ranging from 25% to 50%, depending on the country.

High temperatures and rainfall in October led to a simultaneous maturation of autumn harvested crops such as spinach and cauliflower.

For spinach, the scheduled sowing programs were compressed into a much shorter period. This resulted in a loss of product quality and a lower yield per hectare, which is estimated around 15%.

For cauliflower, the situation has been similar, where the harvest has been concentrated over three weeks instead of the planned five to six weeks, resulting in a reduction in yield per hectare estimated around 20%, and lower quality than expected.

Additionally, the harvest of red cabbage, white cabbage and kale has been close to dire this year. In some regions, white cabbage losses are up to 40%, with losses in red cabbage as much as 50%. Kale, with a harvested yield cut by half, has been significantly affected. 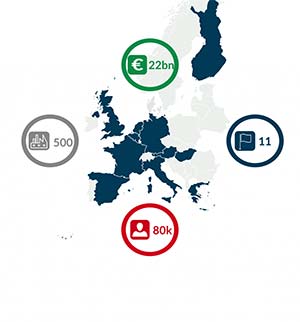 In 2017, the five leading export destinations outside the EU were the USA, Russia, China, Switzerland and South Africa. The most important markets in developing countries include Brazil, Russia, India and China, as well as Hong Kong, South Korea, Vietnam, Mexico and Thailand.