One of two major Lineage facilities at the Port of New Orleans, the complex along the Inner Harbor Navigation Canal will grow from 160,000 to 304,000 square feet. In the process an estimated 50 new warehousing and maritime jobs will be created, adding to the current NOCS payroll of 188 employees. Additionally, the Louisiana Economic Development estimates the project will result in an additional 56 new indirect jobs, making for a total of more than 100 new permanent jobs in the region.

“The Lineage Logistics project is a boon for the City of New Orleans and our entire state,” said Governor Edwards. “The value-added exports out of the Lineage Logistics facility will continue to strengthen Louisiana’s $1.6 billion poultry industry, including nearly 300 commercial broiler producers throughout 11 parishes. We welcome this significant new investment and its economic impact across the state.”

Shipments from the existing and expanding cold storage warehouses of Lineage Logistics draw upon multiple Louisiana poultry producers, including hatcheries, feed mills, broiler complexes and processing plants. In 2020, Lineage facilities in New Orleans partnered with the Port of New Orleans to export 380,000 tons of poultry to global markets.

“This expansion is critical, due to increasing worldwide demand for US poultry, primarily from Angola, Cuba, Hong Kong, Mexico and Taiwan,” said Mike McClendon, Lineage’s president of international operations and executive vice president in charge of network optimization. “We have worked closely with Port NOLA on this project to accommodate growing volumes and new lines of export agriculture commodities, and a growing trade of fresh produce imports.”

Lineage operates the largest network of temperature controlled warehouses in the world, with more than 340 strategically situated facilities offering over 2.1 billion cubic feet of capacity and spanning 15 countries across North America, Europe, Asia, Australia, New Zealand and South America. In New Orleans, the company has two cold storage and blast-freeze facilities that have the capacity to blast-freeze 2.8 million pounds of product to zero degrees in 24 hours.

“This expansion of Lineage Logistics in New Orleans East is a win-win-win for the City of New Orleans,” said Mayor LaToya Cantrell. “Not only does it create economic impact and strengthen our role in the poultry industry, it will also help us get our people back to work by creating 50 new direct jobs, and another 150 construction jobs. On our road to recovery from Covid-19, we have to diversify our economy in order to make a real impact and move the needle for our people around economic mobility, and this expansion is a great step.”

In securing the expansion project, the State of Louisiana has committed $10 million in capital outlay funds, while the Port of New Orleans is providing $2 million and Lineage Logistics is investing $30 million.

“We are elated to see this project move forward,” said Port NOLA President and CEO Brandy Christian. “Poultry exports have traditionally been a strong segment of our cargo portfolio and, due to worldwide demand, we see poultry and other temperature-sensitive cargoes as critical to our future.”

In 2020, Lineage acquired New Orleans Cold Storage as part of its purchase of Emergent Cold. The Port and New Orleans Cold Storage inaugurated a 140,000-square-foot, blast-freeze facility in 2012 at the Henry Clay Avenue Wharf upriver, adding 1.25 million pounds of daily blast-freeze capacity and 38 million pounds of storage capacity for frozen goods. That capacity is in addition to the Jourdan Road site. 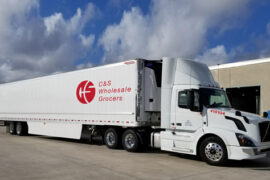 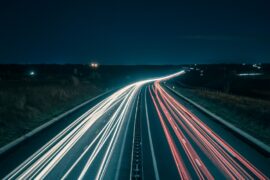 Lineage and 8VC Ally  to Invest in Transport and Logistics Technology 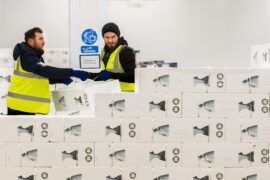