Dieppe, New Brunswick, Canada-headquartered Cavendish Farms’ newest frozen potato processing plant in southern Alberta is officially open for business. The announcement was made at a ceremony held at the Lethbridge facility, where President Robert K. Irving was joined by Alberta Premier Jason Kenney, Lethbridge Mayor Chris Spearman and other dignitaries to celebrate the largest private sector investment in the history of Lethbridge.

“It is a great day for Lethbridge and for our employees, growers, suppliers and customers. Our new state-of-the-art plant is up and running and will allow us to continue to serve key export markets around the world,” said Irving. “There were many reasons we were able to expand our operation in Lethbridge and grow in Alberta. It starts with the availability of high quality potatoes from local growers, the can-do attitude of our employees and the dedicated effort of the project team and the hundreds of vendors who contributed to this project.”

“This new plant is a vote of confidence in Alberta. This is great news for Lethbridge, and for all those Albertans who will earn a living working at this potato processing plant,” said Premier Kenney. “I would like to thank Cavendish Farms for making this important $430 million investment in Alberta, where the food processing industry is growing in size and sophistication, and will be a key part of our strategy to expand Alberta’s economy and create more jobs.”

The modern factory replaces Cavendish Farms’ previous plant and will almost triple its production capacity in Lethbridge. The facility spans the size of seven football fields and will require 735 million pounds of potatoes to process annually. That’s an increase of almost 12,000 acres over what Cavendish Farms currently contracts from local growers. With this expansion, the Lethbridge plant will now provide employment to 238 employees.

The construction job involved 2,000,000 hours of work for contractors during construction. Over 900 workers were on site at peak.  Upwards of 110 Alberta companies were part of the project.

A member of the J.D. Irving Group of Companies, Cavendish Farms produces a wide range of frozen potato and appetizer products for the North American and international food industry, supplying customers in the retail and restaurant sectors. In addition to the factory in Lethbridge, it has two potato processing plants on Prince Edward Island and one in Jamestown, North Dakota, USA. The company also operates a fifth plant in Wheatley, Ontario that specializes in appetizer products. 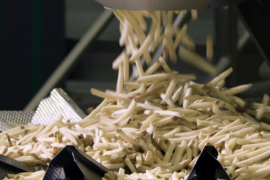 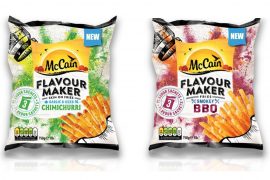 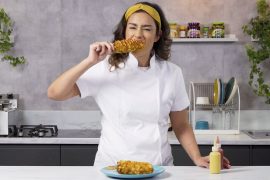