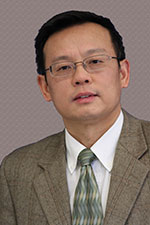 The prize, which recognizes individuals or organizations whose research contributes to the continued enhancement of food quality and safety through freezing, was presented to Dr. Tang during the IAFP 2014 Annual Meeting in Indianapolis, Indiana. The professor was saluted for making significant contributions to enhance the fields of food process engineering and, in particular, the development of in-package microwave pasteurization technology for control of microbial and viral pathogens in frozen and chilled meals.

“The Frozen Food Foundation is pleased to recognize the achievements of Dr. Tang through the presentation of the Freezing Research Award,” said Foundation President Kraig R. Naasz, who also serves as president and ceo of the American Frozen Food Institute.  “His contributions to the field of food science and engineering have aided the scientific community and consumers alike by demonstrating innovation through increased product quality, safety and shelf life.”

Dr. Tang has worked in the area of food science for more than 20 years, focusing on food engineering and food safety.  He developed single-mode microwave assisted sterilization and microwave assisted pasteurization technologies. The US Food and Drug Administration has accepted three filings, and the US Department of Agriculture (USDA) Food Safety and Inspection Service issued a non-objection letter for processes based on those technologies. For those achievements, Dr. Tang earned the 2010 Institute of Food Technologists (IFT) Research and Development Award.

Over the past 20 years Dr. Tang’s laboratory has interacted with and trained hundreds of scientists and engineers from major food and packaging companies worldwide. He is a fellow of IFT and also served as chairman of the Food Engineering Division of IFT from 2010-2011.

The professor is also a fellow of the International Microwave Power Institute, where he served as president from 2009-2010, and the American Society of Agricultural and Biomechanical Engineers (ASABE).  He was presented with the International Food Engineering Award by ASABE and Nestlé in 2012.

“Dr. Tang is committed to bridging scientific findings to create engineering developments for industrial applications,” said Dr. Ralph Cavalieri of Washington State University. “I have no doubt that he will continue to make great contributions to the advancement of modern technologies for food safety to benefit the frozen food industry and society in general.”

IAFP has long presented awards to members of the food industry for their work to enhance food safety.  However, the Frozen Food Foundation Freezing Research Award is the only prize given by IAFP specifically for frozen food-related research. In addition to a $2,000 honorarium, winners receive a commemorative plaque.