The Egyptian food processing sector was in high profile in Russia during the four-day World Food Moscow trade fair which concluded on September 18. Sixty-eight companies from across the nation were on the scene exhibiting a wide assortment of products ranging from frozen fruits and vegetables to fresh produce, value-added meats and poultry, fish, cheese, other dairy items, juices, coffee, baked goods, sweets, biscuits, jams, herbs, spices, cooking oils and other food ingredients.

Having shipped approximately $12 million worth of processed food exports to Russia in 2013, producers from Egypt aim to substantially increase sales this year and into 2015. Business is expected to be boosted considerably by rising demand following the import ban on products from the European Union, Norway, United States, Canada and certain other countries that are being embargoed for one year in retaliation for economic sanctions they imposed on Moscow over its annexation of Crimea and support of secessionist forces in Ukraine.

“The fruits of Egyptian agricultural production and food processing are more abundant than ever. Crops nourished by the fertile Nile that feeds the farms and fields of Egypt are yielding harvests so plentiful that we are fortunate to be in a position to notably increase exports,” said Eric R. Mansour, speaking on behalf of FEC members during Egyptian Day activities held in conjunction with the show. 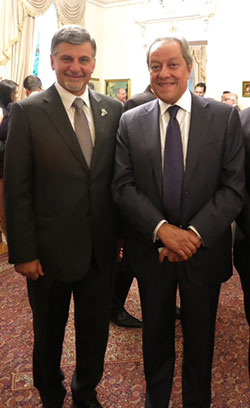 Eric Mansour (left) of Givrex confers with Mounir Fakhry Abdel Nour, Egypt’s Minister of Industry, Trade and Small and Medium Enterprises, after addressing an Egyptian Day function during the World Food Moscow exhibition.Processed food sales of $2.85 billion accounted for fully 14% of Egypt’s non-petroleum product exports last year. The lion’s share went to Arab countries ($1.94 billion, or 68%), followed by Europe ($288 million, or 10%) and the United States ($85 million, or 3%). Imports from all other countries combined were valued at $547 million, or 19%.

Pointing out that until recently Russia has sourced much of its food imports from Europe, Mansour commented: “I am very hopeful that exports from Egypt to Russia will rise exponentially in 2014 and in the years ahead – especially since Russia is now looking to increase imports from new suppliers. And the new Suez Canal branch, which is now being dug and is scheduled for completion before the end of next year, will significantly increase shipping throughput and facilitate even greater enterprise among Egypt and its trading partners.”

Mr. Mansour, who is marketing and sales manager of the Alexandria-based Givrex frozen vegetable and fruit company, concluded his remarks by inviting food importers from Russia and elsewhere to visit Food Gate-Fresh Gate Egypt, which will take place December 6-7 in Sharm El Sheikh.

“Organized by the Food Export Council and managed by the Egyptian Expo and Convention Authority, this exciting B2B networking event will again bring buyers and sellers together in Egypt,” he said. “Qualified importers will be officially invited to attend, and their hosts will be pleased to cover accommodation expenses. So, friends and business partners, here is looking forward to seeing you again this December in Egypt!” – Reported by John Saulnier 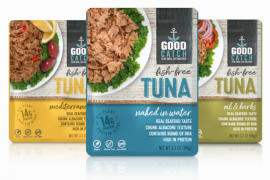 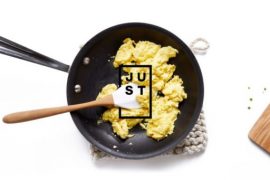