Four months after its introduction in the United Kingdom, Farm Frites’ Ultimate Chip has bagged a coveted Chefs’ Choice Award in the Best Meal Accompaniment category. Declaring that the product was “a good crisp chip with well-balanced flavor and texture,” judges added that its texture and taste “are both of high standard.”

Produced by a 10-step process, the chip (aka french fry) serves up “a truly rustic feel by being ‘perfectly imperfect’ in design,” quipped Nic Townsend, the company’s marketing manager for the UK and Ireland. “It takes the strain off busy chefs and offers time savings, with the end result to match with the chips they make themselves.” 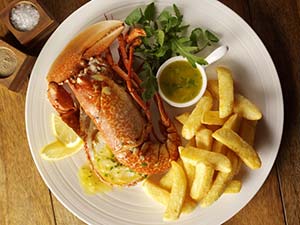 The Chefs’ Choice Awards competition is organized by William Reed Publishing to showcase the innovative work of foodservice suppliers up and down the line – from wholesalers to manufacturers. Entries are judged by chefs for chefs.

“It’s a massive coup for us to have won this award, particularly against such high quality competition,” remarked Townsend. “This was a UK-first launch and was developed with valuable input from a team of chefs who work in the premium burger and casual dining sectors. We took our time to get this product right and the award is well deserved for everyone who has been involved in the manufacture of our Ultimate Chip.”

Made from potatoes harvested at the peak of freshness before being processed and quickly frozen, the Ultimate Chip serves up a contrasting “fluffy inner for a melt in the mouth feel with a crispy outer for the ideal crunch,” said Townsend.

The frozen product can be deep fried in small quantities in just four to five minutes. It is allergen-free and reaches the UK government’s salt pledge target.