Derrimut, Victoria-headquartered Bulla Dairy Foods, the retail ice cream brand leader in Australia, has obtained a license from Mondelez Australia to produce a frozen line of Cadbury Marvellous Creations. The shelf stable confectionery range, introduced in 2012, has been quite successful as a number of new flavors were added last year. 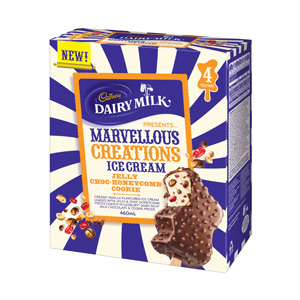 “By bringing this product to life in a frozen format, we’re confident that the melding of two already popular categories will create an opportunity for consumers to purchase, share and enjoy with friends and family in a novel way,” said Nicolas Georges, Mondelez Australia’s research and development director of premium chocolate and dairy in the Asia Pacific region.

“The launch of this hugely successful confectionary range into the frozen category will enable both companies to demonstrate the innovation and creativity consumers are seeking from packaged foods today,” said Nick Hickford, Bulla’s general manager in charge of sales, marketing and innovation.

In business since 1910, Bulla Dairy Foods is 100% family-owned and has been run by the same three families for five generations.  Its product line runs the gamut from ice cream and cottage cheese to sour cream, whipping cream, and frozen and chilled yogurt.