Since 1967, ICEE has been an iconic frozen treat enjoyed by moviegoers, theme park visitors, mall shoppers and others throughout North America and beyond. In celebrating its half-century standing as “America’s favorite frozen beverage,” The ICEE Company will debut new flavors and limited-edition packaging throughout 2017. 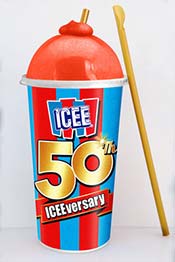 “For five decades, consumers of all ages have enjoyed more than 150 ICEE flavors, including top sellers like Cherry, Blue Raspberry and Coca-Cola, while taking in the latest motion picture, embarking on a road trip with family and friends, or cooling off during a hot day at the local amusement park,” said Dan Fachner, president of The ICEE Company. “We couldn’t think of a better way to celebrate our golden anniversary than by continuing to provide memorable ICEE moments for our beloved fans. We look forward to unveiling some of our most innovative and exciting flavors to date, including a surprise mystery flavor to satisfy adventurous taste buds.”

In commemoration of the brand’s 50th anniversary, ICEE consumers will have the opportunity to sip new flavor blends in limited-edition 32-ounce cups that will be rolled out throughout the year at select retail locations in the United States. Offerings include: Fanta Sour Grape, Dragon Fruit, Mango Strawberry, Lemonade and Strawberry Lemonade, Laffy Taffy and Mango Chili Lime.

The ICEE Company began as ICEE of Los Angeles in 1967. Over the next two decades, the company expanded in the western United States and eventually became ICEE USA, which was acquired by Pennsauken, New Jersey-headquartered J&J Snack Foods in 1987. Today, the product line has both national and international distribution, selling approximately 500 million ICEE drinks each year. That’s enough to fill 141 Olympic-size swimming pools.