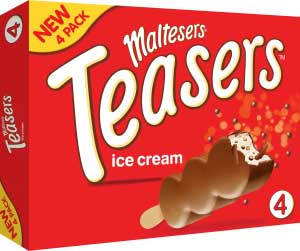 A promotion campaign budgeted at over £10 million will be spent to support Maltesers during 2016, as the iconic brand celebrates its 80th birthday. Last year, sales of single sticks of Maltesers Teasers ice cream increased by 13%. In in UK, a pack of Maltesers confectionery is bought every five seconds by consumers who enjoy the product’s special malty taste.

“With ice cream being the third largest category for in-home treats and the four-pack being the most popular pack format, it was clear we were missing a trick with not having the well-loved Maltesers Teasers in this new pack format,” said Phil Shaw, general manager for Mars Ice Cream. “With its eye-catching red packaging and familiar brand appeal, we are sure that the new pack format will soon become a firm favorite with retailers and consumers alike.”