“We are warming up the frozen food aisle,” said Vikram Bawa, the company’s Toronto-based vice president of marketing.

It’s not an easy feat even for a Canadian icon like McCain, which, according to the Reputation Institute, is the third best-loved brand in Canada. But Bawa believes a major re-branding and positioning strategy will help the company capture a greater share of the $5-billion frozen food category in Canada. 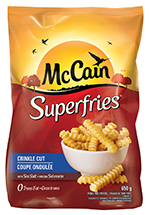 The “warming up” begins with a new logo and new packaging for McCain’s entire lineup of frozen potato products. The packaging features warm imagery of sunshine over a farmer’s field and birds flying off in the distance.

“Even though we make frozen food, consumers told us that they associate our brand with warm moments, such as sharing meals with friends and families,” Bawa said. “So we tried to capture that sentiment in our new look and make the connection to our wholesome ingredients.”

McCain focused on making its food with simple, wholesome ingredients when it launched the McCain It’s All Good campaign in 2009. The latest move is part of the evolution of that initiative.

It’s an evolution that also includes several new products and a new strategy to convince people to eat more frozen potatoes. Currently, Canadians eat potatoes in one of every three dinners prepared at home – that’s an average of 105 meals a year. But of those 105 meals, only 15 are made with frozen potatoes even though Canadians are busier than ever and are often looking for quick and easy dinner solutions. Bawa sees that as a huge opportunity.

“And we’re not just talking about mealtimes,” he said. “We’re giving consumers more ways to enjoy potatoes. For example, there are times for sharing, snacking and times just to have fun. We want people to know that we have products that are perfect for all of these occasions.”

McCain opened its first french fry plant in the small town of Florenceville, New Brunswick, back in 1957. It now has operations around the globe with almost 20,000 employees and annual sales of about $7 billion. And although the company estimates that one of every three french fries eaten anywhere in the world is a McCain fry, Bawa wants people to know that the company produces more than just fries.

“We have a wide range of potato products including red skin potatoes, hash browns, potato pancakes, sweet potatoes, wedges and Smiles. In fact, we currently have about 40 different potato products and we’re always innovating – looking for ways to offer consumers new and interesting ways to enjoy potatoes,” he pointed out.

Historically, McCain has focused on Canadian families and has targeted its marketing at the mothers or caregivers who do the shopping for family meals. But as 60% of Canadian households today consist of either single adults or couples, McCain wants them to shift to frozen as well. Currently, only about half of the smaller, adult-only households buy frozen potatoes – a retail market that accounted for almost $287 million last year, according to Datamonitor figures.

“They may not know we have a red skin potato that goes great with their meals, as do low-fat fries. Or that our wedges make a great, warm tasty snack when they have friends over. Reaching out to them is a big shift in our approach,” said Bawa.

The marketing vice president noted that the company is also changing the way it communicates with consumers, by making greater use of social and digital media. Its new integrated marketing campaign, which kicked off on October 6, urges people to “share something good.”

As part of a commitment to sharing with others, McCain has pledged to donate a minimum of $1 million in cash and food to Food Banks Canada over the next year to help feed the hungry. It hopes to double that amount by encouraging others to share as well. 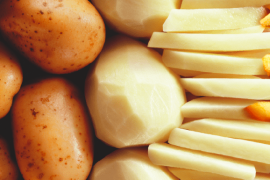