This is the year of the cone for Three Twins Ice Cream. The Petaluma, California-based producer of organic ice cream will unveil three new cone creations during the March 9-13 Natural Products Expo West in Anaheim. Visitors to Stand #2477 will be able to sample its Sugar Cone and Cake Cone, in addition to the all-accommodating Sundae Cone.

Compact, light and crisp Organic Cake Cones are formulated to offset the intensity of richer flavors. And for consumes looking for an extra crunch of sugar, Organic Sugar Cones are made to envelop ice cream in a crunchy platform that can easily accommodate two or more scoops.

“We are thrilled to bring organic cones to the market that are up to par with our ice cream,” said Neal Gottlieb, one of the company’s founding twin brothers. 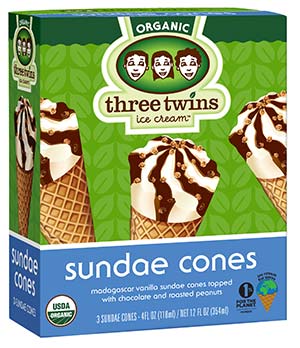 Neal Gottlieb started Three Twins Ice Cream in 2005 as a single scoop shop, with the goal of building the next great American ice cream brand. Initially he was not just the company’s only employee, but came to the job with absolutely no previous ice cream-making experience. Financing the startup venture with $70,000 of personal savings and a $25,000 loan from “The Bank of Mom and Dad,” he worked 90 hours a week at a storefront in San Rafael, California.

In 2010, Three Twins opened a 4,200-square-foot ice cream manufacturing facility in Petaluma and rapidly increased distribution from 50 to hundreds of locations. Four years later, the company opened a production plant in Sheboygan, Wisconsin, to cater to growing national demand for organic ice cream. Today it also operates four scoop shops in and around the San Francisco Bay area, and employs approximately 100 people.