This reorganization of key personnel follows the departure of Anne Schumacher, former vice president for both Food and Food Technology, who left the company at the end of February.

“We are delighted to have been able to gain these two experienced trade fair managers,” said Gerald Böse, chief executive officer of Koelnmesse GmbH. “Together with their teams, they will further develop and expand the future Food and FoodTec business units. I am convinced of the international growth opportunities for our existing events in these areas, but also for premieres like Anuga HORIZON.”

Thirty-nine-year-old Steinbrück has held managing positions in the international trade fair sector for more than 15 years: at Messe Frankfurt, most recently as deputy director of the German Pavilion at EXPO Milano 2015, before transferring to Koelnmesse in April of 2016. She has served as director of the imm cologne furnishings trade fair since August of 2018. Soon she will be assuming responsibility for the Cologne trade fairs ProSweets Cologne, Anuga FoodTec and euvend & coffeena, as well as for the respective portfolio of events outside of Germany.

Thirty-eight-year-old Mingers is coming to Cologne with 11 years of experience at Messe Düsseldorf. At Koelnmess he will assume responsibility for ISM, Anuga and the premiere event Anuga HORIZON, as well as an extensive portfolio of events abroad.

About the Trade Show Organization

Koelnmesse employs around 1,000 people. As a city trade fair operator in the heart of Europe, it boasts the third largest exhibition grounds in Germany and, with almost 400,000 square meters of hall and outdoor space, ranks among the top ten largest trade fair venues in the world. Each year, Koelnmesse organizes and manages some 80 trade shows, guest events and special events in Cologne and in other locations around the world. Its portfolio reaches over 54,000 exhibiting companies from 122 countries and approximately three million visitors from more than 200 nations. 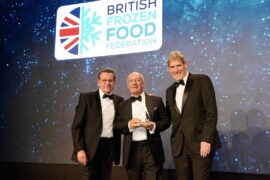