What’s in a name? Quite a lot, to be honest, among folks in the food industry who want to keep it real. For John Connelly, president of the McLean, Virginia-headquartered National Fisheries Institute (NFI), honesty is always the best policy. As such he has a real “beef,” so to speak, with the idea of taking poetic license to label vegetable-based alternatives as meat or fish.

“Bacon cannot be ‘veggie’ and shrimp cannot be ‘vegan.’ These are just facts at, literally, the cellular level. They are not open to interpretation and they are certainly not constitutionally protected rhetoric,” he wrote in a letter recently published by The Wall Street Journal.

Nomenclature surely has its place, and in the case of the US Food and Drug Administration’s lengthy list of more than 5,000 acceptable words and market names for seafood sold in interstate commerce, faux fish and fake hake are not to be found. Nor are vegan shrimp balls or vege tuna salad.

With apologies to Gertrude Stein, rules are rules are rules. And within the food labeling realm they generally are implemented to protect consumers against fakery, fraud, deception, unethical marketing and over charging at retail stores and restaurants.

“While we may agree that there can be excess regulation, seafood companies must follow those (FDA) rules,” says Connelly.  “We are not opposed to new products, but let’s be fair and consistent about labeling requirements. A vegetarian ‘lobstah’ is not the crustacean of the North we so enjoy on summer nights, no matter how clever the marketing pitch – and producers should follow the same rules as seafood companies.”

With the proliferation of faux hamburgers, fake steak, plant-based chicken nuggets and wannabe seafood splashing and dashing around the world, suppliers of traditional, authentically “real deal” products are increasingly on the defensive across multiple animal protein fronts.

In the USA, Missouri became the first state to regulate usage of the word “meat” in food labeling. Legislators in Nebraska, Tennessee, Wyoming and Virginia have followed the “Show Me” state’s lead by introducing bills to curb enthusiasm for what they regard as deceptive labeling of non-meat products.

Carol Blood, who happens to be a vegetarian as well as a state senator from Nebraska, a jurisdiction where citizens take pride in being the national leader in beef production, has sponsored a bill aimed at amending deceptive trade practices law with the inclusion of language to protect against deceptive meat labeling.

“This is about unethical marketing. This is not about wanting to be the word police,” she insists. “We’re not going after ‘Veggie Burger’ or ‘Tofurky.’ We’re interested in companies that engage in deceptive advertising when their products are insect-based, plant-based or are lab-grown food.”

Speaking of lab-grown food, Rehovot, Israel-headquartered Aleph Farms claims to be the first company to have mastered the science of producing beefsteak in a laboratory. The startup agri-tech company aims to develop and market a high-end product line that will appeal to consumers concerned about healthy eating, environmental protection and animal welfare. 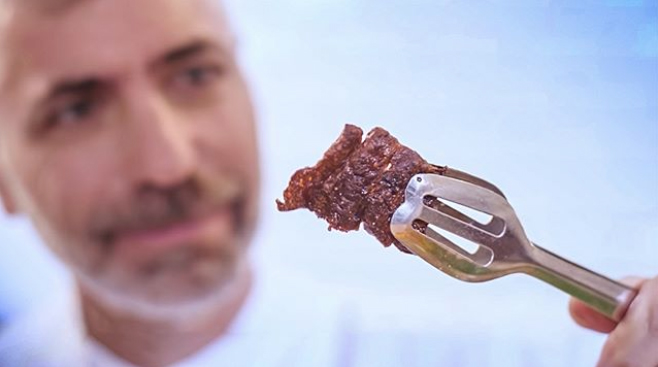 The business of animal cell-based meat production has attracted a good deal of interest and investment in the last several years, as analysts believe that the demand for plant-based meat substitutes could top $100 billion in value over the next decade or so.

Meanwhile, not far from the waterfront in New York City – just across the Hudson River from Hoboken, New Jersey, where Director Elia Kazan’s film classic On the Waterfront film starring Marlon Brando was shot in 1954 – the Ocean Hugger Foods crew is directing shipments of a plant-based Ahimi “raw tuna” alternative made from tomato, and a vegan Unami “freshwater eel” made from eggplant, across the Atlantic to the United Kingdom. They are scheduled to be launched in the British foodservice sector this fall.

Created after four years of development by Chef James Corwell, Ahimi (a takeoff on Ahi, which is the Hawaiian word for yellowfin tuna, and mi, which means spirit in Japanese) is offered as a component in sushi, sashimi, nigiri, maki rolls, poké, tartare, ceviche and other dishes. 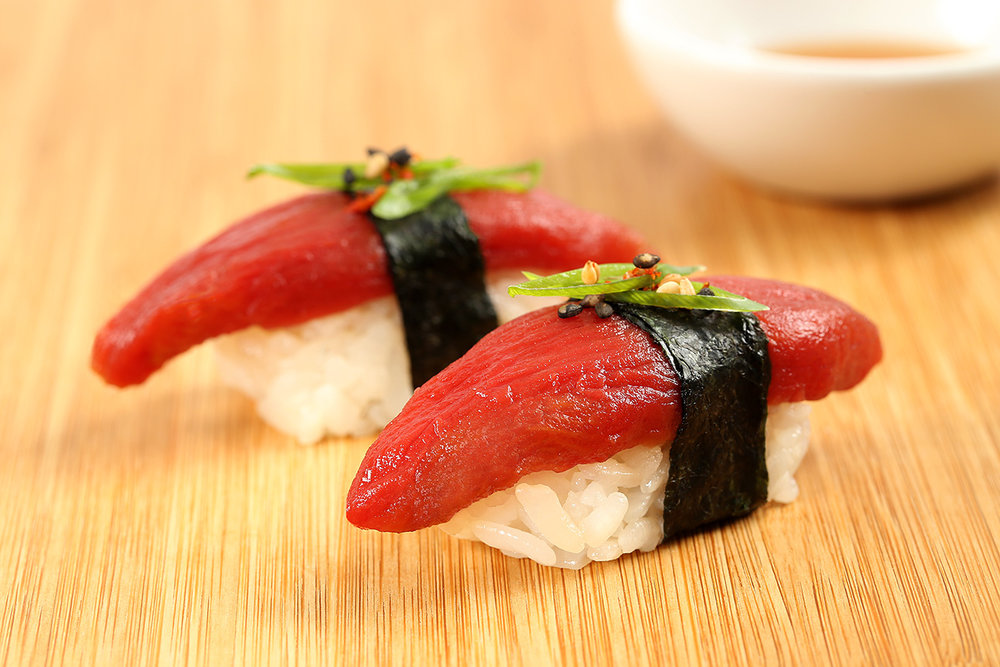 The chef perfected a proprietary “slow and low cooking” process to transform tomatoes, which contain high levels of naturally occurring glutamic acids, into “vegan sushi” that’s reddish-pink in color and “puts forward the taste and texture of raw Ahi tuna.”

The product was initially launched through Whole Foods Market outlets in the United States during November of 2017, and is now available in other stores and restaurants as well as corporate dining rooms and college cafeterias across North America.

Marketed as “Japanese-style Ahimi halves,” the culinary innovation may be used as a replacement for raw or lightly smoked fish. Portions are created by cutting straight down the middle and trimming at the edges, as desired. All that sushi chefs or kitchen assistants have to do is place thawed slices over a small ball of cooked sushi rice and add nori, ginger and/or wasabi to taste.

Ahimi has received favorable reviews from a number of food critics, including this comment published by The Daily Beast: “I tried a few pieces of the final product, and it’s convincing. The texture and look are spot-on, and a friend could not tell the difference between Ahimi and raw fish.”

Still under development in Ocean Hugger Foods’ test kitchen is a carrot-based faux salmon, which will be served up as Sakimi. We’ll have to wait and see what the sashimi purists and the “keep it real” word-watchers say about the debut.