Berkowitz for President? It’s Election Silly Season in US 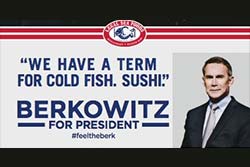 The heat is on during this period of marathon electioneering in the United States, and now sushi – no doubt previously frozen – has indirectly become a hot issue.

While some political pundits complained on July 27 that it was “sexist” for front-page newspaper photos of Bill Clinton to eclipse those of his wife, the first woman to be nominated by a major political party to run for the US presidency, others were outraged over the use of her image in a seafood restaurant chain advertisement published in Boston newspapers on the 25th.

On the first day of the Democratic National Convention in Philadelphia, Legal Sea Foods ran a full-page ad featuring a large portrait of Hillary Clinton. Beneath it, separated by the company’s logo and two red stripes, juxtaposed with a much smaller image of the chain’s chief executive officer, Roger Berkowitz, was bold-face text declaring: “We Have a Term for Cold Fish. Sushi.” – Berkowitz for President #feeltheberk

The #feeltheberk hashtag in the mock presidential campaign ad was a reference to the “Feel the Bern” rallying cry of real presidential hopeful Bernie Sanders, who finished second to Mrs. Clinton in a hotly contested battle that his supporters believe was rigged by party insiders. “The system isn’t broken, it’s fixed,” their placards proclaimed during demonstrations outside the convention hall in Philly. 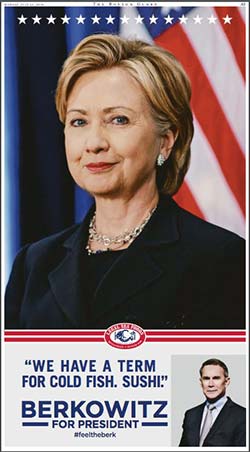 Self-professed “Fanatics for freshness,” even if shrimp, sashimi, sushi components and other items on the menu may well be previously-frozen fare, Legal Sea Foods has long championed the slogan: “If it isn’t fresh, it isn’t Legal.”

Well, some critics of the latest installment of the fake presidential ad campaign are apparently of the opinion that the Legal Sea Foods marketing team has been all too “fresh” with Hillary, in the sense that the advertisement has overstepped the boundaries of acceptable behavior by associating her with “cold fish.” This may be interpreted as an unfriendly person who does not share true feelings. You, dear reader, may discern for yourself what the politically incorrect translation of the terminology may be.

In this seemingly endless presidential election cycle in the USA, Legal Sea Foods ads have seized the moment to make light of it all via creative and controversial print media and with TV spots. In presenting Berkowitz as a fake candidate alternative on the stump for the White House, it previously ran messages that promised: “My first act in office will be to legalize sea weed,” and “What government needs is fewer stuffed shirts and more stuffed shrimp.”

It stands to reason that the company, which has been in business for more than 60 years and is headquartered in Massachusetts – the only state that voted for liberal Democrat George McGovern for President against Republican Richard Nixon way back when – could lose some business from politically correct consumers. Then again, it could see a surge in demand in its mail order and gourmet gift division, which is an equal opportunity shipper to red and blue states around the country.