Birds Eye Gets Creative with Deli Chips Ads Down Under

How much work goes into the production of frozen french fries, or chips, as they say in Australia? Plenty, as seen in a just-launched television and online advertising campaign that creatively promotes Birds Eye Deli Seasoned Chips in the land down under.

The 30-second “We Prep. You Cook” commercial, complete with a riveting soundtrack, starts with tubers being gently pulled from the ground by hand. Whimsical post-harvest scenes show spuds submerged in water for washing, thereafter subjected to careful scrutinization, towel-drying and primping by retro-styled “potato beautifiers.” Next the peeled potatoes are further checked by an inspector peering through a magnifying glass, then sliced into strips before being zenfully accented with basil, industrially quick frozen, baked and served. 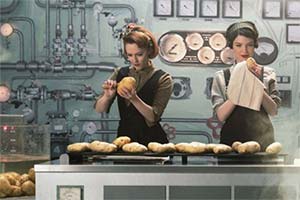 Pleased with the presentation, Suzanne Harman, marketing manager for Simplot’s Birds Eye brand in Australia, commented: “It really dials up the attention we put into each step of the process, and enabled us to make heroes out of every day cooks.”

“We wanted to develop a creative platform for Deli that shifts people’s perceptions of the frozen food aisle. The concept of prep moves the conversation to one of choice over convenience,” said Jess Lilley, creative director of the campaign produced by the J. Walter Thompson (JWT) Melbourne advertising agency and directed by Simon Harsent of The Pool Collective.

Seven characters appear in the 30-second spot, while a shorter 15-second version pared the cast down six by editing out the Antarctic explorer. As for the “star” of the show, JWT reports that 320 potatoes were used to create the finished product. 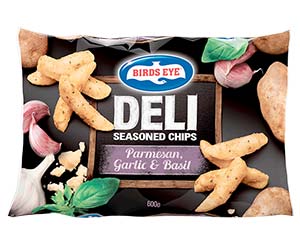 New to the line is a 600-gram pack of Deli French Fries (not Chips, mind you!) seasoned with garlic herb and a twist of lemon).