Just as Ben & Jerry’s is about to launch its new BRRR-ito treat (two scoops of ice cream plus chocolate cookie crumbles and a fudge drizzle, all rolled up in a soft waffle wrap) on April 20, word has leaked out that there will be more to cheer about later in the year — well, at least for adult devotees to the iconic brand. 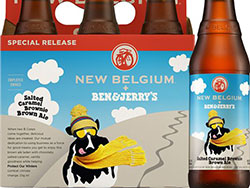 The Burlington, Vermont-headquartered ice cream company, a unit of Unilever, is working with Fort Collins, Colorado-based New Belgium Brewing to formulate a craft beer that will sold as Salted Caramel Brownie Brown Ale. It is scheduled to be ready to pour into the marketplace as a limited batch release by this autumn or early winter.

“Our fans can expect something both delicious and impactful,” commented Jay Curley, senior global marketing manager, in a company statement.

“New Belgium Brewing is an iconic national brewery in terms of doing good works and doing good products, said Sean Greenwood, communications director at Ben & Jerry’s. “They’re a very progressive, cool business we’re excited to be able to partner with and do this sort of thing.”

Text on prototype six-pack carrier packaging for the socially-appealing suds reads as follows: “When two B corps [meaning companies with B-Corporation status certifying that certain environmental standards have been met] come together, delicious ideas are created. Our mutual dedication to using business as a force for good means you get to enjoy this brown ale laden with chocolaty, salted-caramel, vanilla goodness while helping Protect our Winters (a non-profit environmental organization) combat climate change. Dig in!” 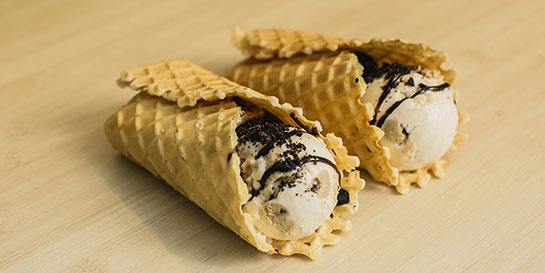 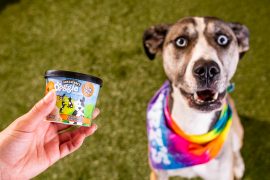 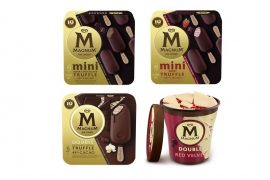 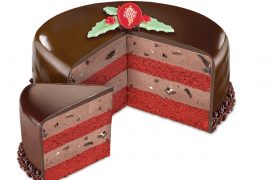