Aye, it was only a matter of time before Captain High Liner would receive orders to project a more contemporary persona in the Canadian marketplace. Last year Nomad Foods in the United Kingdom repositioned Captain Birdseye in TV commercials as a “more authentic” character played by Italian actor Riccardo Acerbi to stimulate demand for its fish and seafood line among intergenerational consumers. In the USA, the iconic Jolly Green Giant was recast by B&G Foods in 2017 as a kinder, gentler behemoth to promote frozen vegetable products.

Now the time has come for the old salt from the Lunenburg, Nova Scotia port town headquarters of High Liner Foods to deep-six his seafaring cap and thick, cable-knit turtleneck sweater. The younger looking helmsman of today sports fashionably slicked back wavy gray hair along with a more closely trimmed beard and moustache. And he’s wearing a hip white T-shirt under a still classic true blue navy pea coat.

Before High Liner officially announced its frozen seafood product line’s rebranding campaign, Ottawa artist Andrew King spotted the venerable mascot’s new look on a seafood pack in the freezer section of a local grocery store. His reaction, via Twitter, was:

“I don’t want to alarm anyone, but they removed Captain High Liner’s captain hat and turtleneck and it’s freaking me out. Now he looks like that well groomed and fit grandpa guy at a hipster bar…Dude’s been heaving nets all his life and it’s all paid off.” 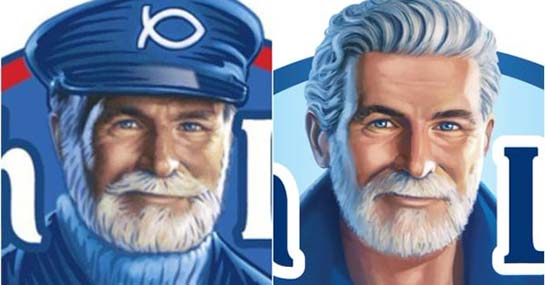 King’s comments set off a wave of free social media publicity punctuated by humorous posts, ranging from “He’s just on shore leave” and “Are you sure they just didn’t accidentally print his Tinder profile pic on the box?” to “He’s a couple of years away from a man bun.”

A week or so after the tweetstorm broke, High Liner’s PR department formally declared: “He’s an icon of the seafood aisle. He’s been a part of Canadian meals since the 1970’s. And he just got a fresh new look that’s already turning heads. That’s right, Canada, there’s a new Captain High Liner in town.”

Craig Murray, High Liner’s senior vice president for marketing and innovation, elaborated on the old timer’s makeover this way: “We wanted the brand’s visual identity to reflect our modern product line and our passion for seafood…We appreciate the attention and that people like him. He is the same trustworthy Captain, but now people see him in a new light. His look fits our ‘young at heart’ personality. He reflects that we are a modern brand creating new and inspiring seafood products.”

Murray went on to point out that the revamped icon comes as part of a major remake of the High Liner brand and coincides with the company’s 120th anniversary this year.

“The new look is an exciting and dramatic refresh,” he stated. “But it was never about creating a new Captain or changing him too much. We wanted people to see what was always there. He’s the Captain Canadians know and love. We just let him shine with a trim and a fresh wardrobe.”

The Tweetisphere jury is still out regarding the tack High Liner Foods is taking as it sails the turbulent seas of modern marketing in endeavoring to win the hearts, minds and stomachs of new customers while holding on to its traditional base of clientele.

“I’m very uncomfortable with a familiar face from my childhood apparently being rebranded with his new SeniorMatch profile pic,” tweeted a disappointed Nicole Storeshaw.

On the other side of the ledger, there was this positive note from Lynette Monteiro: “Hey. This grandma is just fine with the change.”

Patricia Parulekar dialed in her approval unabashedly by asking: “Errrr, can I have his phone number?”

The new Captain assumes the helm at a time when the company is facing headwinds. For the 52-week period ending on December 29, 2018, sales generated by North America’s largest marketer of frozen, value-added seafood products decreased by $5.3 million to $1,048.5 million. Gross profit, however, increased by $2.1 million to $188.2 million. Adjusted EBITDA decreased by $3.6 million to $62.5 million compared to $66.1 million, and net income decreased by $14.9 million to $16.8 million. 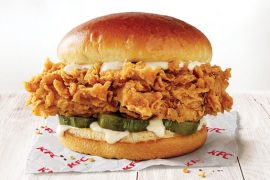 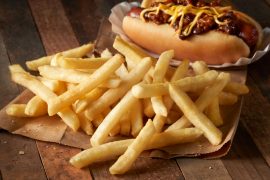 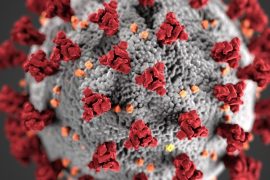