Don’t Wing it by Blaming Millennials, Seize the Time and New Opportunities

The last time this Boomer had the pleasure of dining with a party of hearty-appetite Millennials they enthusiastically dug into servings of spicy chicken wings, barbecued ribs and french fries like there was no tomorrow. The bar food was washed down with multiple mugs of cold beer, and our refill-ready waitress was most adept at replenishing wings and other things as needed. It was barley 8 PM on a Thursday, well past happy hour at a neighborhood pub on the Jersey side of the Hudson River that separates the Garden State from New York City. Judging from the crowd on hand, the proprietor would be pleased with the night’s receipts.

But apparently not all is well on the North American bar and casual restaurant business scene. This was brought to my attention via a letter recently sent to Buffalo Wild Wings stockholders by Sally Smith, the Minneapolis, Minnesota-headquartered franchise’s 59-year-old president and chief executive officer. 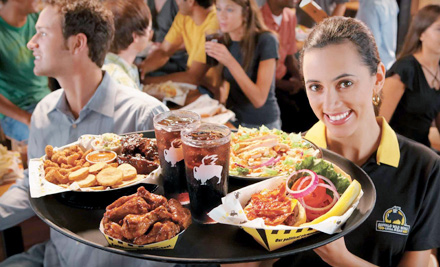 “Casual dining restaurants face a uniquely challenging market today. Millennial consumers are more attracted than their elders to cooking at home, ordering delivery from restaurants and eating quickly, in fast casual or quick-serve restaurants. Mall traffic has slowed. And, surprisingly, television viewership of sporting events (important for us, especially) is down,” wrote Smith, who intends to retire before the end of the year after almost 21 years at the helm.

Notwithstanding higher costs for chicken wing purchases as well as promotional activity, labor and operating expenses, Q1 sales revenues rose 5.2% to $534.8 million. That was a bit below Wall Street expectations of $536 million for the $2.5 billion market capitalized company that operates 1,220 restaurants around the world and sells an average of 27 million traditional bone-in and boneless chicken wings per week. 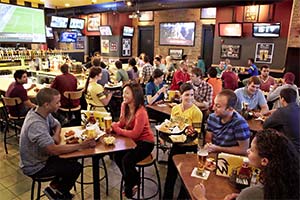 Buffalo Wild Wings shares (BWLD) were priced at $145.95 as NASDAQ trading closed on June 9. The quote was down $11.65 since the company’s annual meeting on June 2, when hedge fund activists pushing for structural change seized three of nine seats on the board following a proxy battle waged by Marcato Capital Management forces.

For the year the stock price is about even, but over the past 18 months it has declined 26% from its 2015 high point. Adjusted earnings of $1.44 per share during Q1 fell by 16.8%. Compounded returns, however, have amounted to 24% per year since the company’s initial public offering in 2003.

On a much smaller scale than Buffalo Wild Wings, I’m sure that the owner of my local burger and brew, wings and things tavern rang up positive first quarter sales results. That’s not only good news for him but for the frozen food industry too, as many of the center-of-the-plate and side dish components on the menu enter his premises in frozen form. This is the case with most such establishments across the country.

One wonders how many kitchen take-out orders are being delivered to Millennials (defined by a majority of demographers as those born between the early 1980s and mid-90s) by Grubhub (which has a national network of more than 55,000 restaurant partners and 8.8 million active diners) and other gofer services. My guess is most of them, as online and mobile ordering platforms naturally appeal to the largely digital native generation that numbered more 75 million people in the United States during 2015. In case you’re counting, that consumer base has surpassed the 74.9 million Baby Boomer bloc (those born from 1946-64), according to a Pew Research Study.

A survey recently published by The Spoon says that 36% of respondents under age 30 have food delivered from their local restaurants, compared with 34% of people aged 30-44, and just 19% of those over 60. Folks in the 30-44 bracket are most likely to use meal kit services (10%), compared with a tad more than 9% of those under 30. For consumers north of age 60, the percentage is just 3%.

Indeed, Millennials are clearly the nation’s leading lifestyle demographic these days. While 19 to 35-year-old “New Boomers” have been associated with a number of significant positive and negative economic shifts by market watchers, personal observation precludes this writer from believing that they pose a threat to the well being of casual dining eateries in America – at least not to the ones that are well managed and adapt to changing tastes and menu preferences. This will become more apparent as spending power increases going forward and they can afford to dine out more often.

Technomic, a Chicago, Illinois-based management consulting company that specializes in the foodservice sector, figures that contemporary casual dining chains registered a 4.5% gain in sales last year. Noting that sports bar revenues were up by 3.9%, its 2017 Top 500 Chain Restaurant Report suggests that there is still opportunity in this menu category for operators to appeal to consumers with “craveable pub fare like burgers and wings, and an overall sports-focused atmosphere.”

All the while the take-out market could be poised to grow at a faster rate than both traditional and non-traditional restaurants and sports bars. That’s because, according to a LEK Consulting survey, 40% of Millennials prefer eSports to football, baseball, basketball and ice hockey. At-home video gaming is a big part of this highly competitive and addictive activity, which means that the foods that fuel e-players are often grab-and-eat treats such as chicken wings, popcorn shrimp and pizza.

Twitch.tv, the world’s leading video platform and community for gamers, is said to gather 45 million or more players monthly to broadcast, watch and chat about gaming. Pro gaming events will generate $696 million worldwide this year, according to Newzoo, an industry intelligence company.

“That’s a fraction of the billions that the NFL, the NBA and MLB make,” writes Jeff Grub of VentureBeat. “But eSports revenues could catch up quickly as the Millennial generation overtakes older demographic segments as the biggest spenders over the next two decades.”

“Though they represent a large and increasingly integral segment of the US sports fan base, Millennials bring to the table a unique challenge,” write LEK Managing Directors Gil Moran and Alex Evans. “Unlike their Baby Boomer and Gen X predecessors, Millennials follow a much broader range of both traditional and alternative sports as adults, and despite having less time on their hands, have a far greater selection of viewing alternatives.”

Joe Pawlak, managing principal at Technomic, believes that the American restaurant industry is facing its most challenging environment since the Great Recession of 2008. He says that pricing is a major factor, as units have been aggressively hiking price points to make up for slowing traffic and in the process have diluted the value for money expectation among many consumers. In 2016 menu price inflation for leading chains in North America was 4.3%, while on average the industry as a whole came in at 2.6%.

“Secondly,” stated Pawlak, “competition is becoming more intense and fragmented. Today, consumers have more and more competent options for their food and beverage selections than ever before. Individually, these segments may not be large, but in aggregate they present a major thorn in the side of the restaurant industry. Supermarkets have taken their game up a few notches on selection, value and quality in their prepared foods areas. Meal kit providers offer an additional consumer opportunity for preparing easy-to-make gourmet quality foods in the comfort of their own homes. Even c-stores are slowly turning around their ‘roller grill food’ image to be an acceptable food-away-home source, especially among Gen Zers and young Millennials.”

While the trend of retail grocery deflation and foodservice inflation in recent years has seen the price gap widen between the two sectors, Technomic’s market watcher rejects the notion that consumers are forgoing restaurants in greater frequency in favor of preparing more meals at home.

He asks: “When did consumers suddenly find time to cook on a regular basis or even learn how to cook? Recent supermarket results suggest softness in that sector as well, and frozen prepared foods, which often are viewed as convenient at-home substitutes for restaurant meals, have been flat for many years.”

Well, as far as finding time to cook goes, weekends afford the best opportunity to do so for those who work away from home on Monday to Friday schedules. And for “sous chef” Millennials who have not left the nest, “home school master chef” lessons are still available free of charge from their elders.

A survey of 1,000 US households conducted recently by The Spoon found that 95% of Millennials cook weekly at home, though no breakout is provided for the percentage doing so under mom and/or dad’s roof as extended nesters. It’s estimated that approximately one-third of Millennials still live with and depend financially on their parents in post-recession America. Currently, more adults between the ages of 18 and 34 reside with their parents (almost 23 million) than live with a spouse (20 million) in their own house or apartment. Forty years ago over twice as many people in the same age group lived with a husband or wife (almost 32 million) than with mom and/or dad (14.7 million).

It goes to figure that with a significant percentage of Millennials acquiring kitchen skills either by choice or chance, there should be an interesting variety of new food products and recipe adaptations on the menu in the near future. Will they include the next wave of nouvelle cuisine dishes or yin yang balanced macrobiotic meals, followed by paleo desserts that aren’t overloaded with sugar, cream or flour? Who knows?

While pondering the scope of food fare now being imagined and developed by Millennial mantra culinary artists, this writer would be better served to do so over a basket of hot Buffalo Wings and a cold pint of Lager while watching a Yankees baseball game on a big screen TV. Guess I’ll head over to my local bar and grill to discuss the matter with a highly skilled short order cook, creative mixologist and a generally Generation Y clientele. 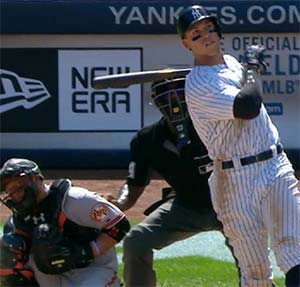 Turned out that upon my arrival, however, nobody was inclined to talk about the topic I had in mind. The whole house was busy celebrating Aaron Judge’s 495-foot home run that rocketed over Yankee Stadium’s left field bleachers at 118 miles per hour (MPH) in what turned out to be the Bronx Bombers’ 16-3 whipping of the Baltimore Orioles. A night before in New York’s 14-3 victory he slammed a homer that had off-the-bat “exit velocity” of 121.1 MPH against a 92 MPH fast ball – the highest registered blast in Major League Baseball history!

Wonder what the rookie slugger is eating before games to get so much lift. Atomic Chicken Wings, perhaps?