The US Food and Drug Administration (FDA) on November 7 called for measures that would eliminate virtually all artificial trans fats from the national food supply. This will affect some segments of the frozen food industry, including makers of pizza and pies. However, most producers of frozen products have already removed trans fats from their recipes.

More than decade ago, a sea change began in the American diet, with consumers starting to avoid foods with  trans fat and companies responding by reducing the amount of trans fat in their products, reported the FDA This evolution began when the agency first proposed in 1999 that manufacturers be required to declare the amount of trans fat on Nutrition Facts labels because of public health concerns. That requirement became effective in 2006.

However, there are still processed foods in the marketplace that have been made with partially hydrogenated oils (PHOs), the major dietary source of trans fat in processed food. Trans fat has been linked to an increased risk of coronary heart disease, in which plaque builds up inside the arteries and may cause a heart attack.

The Centers for Disease Control and Prevention estimates that a further reduction of trans fat in the food supply can prevent an additional 7,000 deaths from heart disease each year and up to 20,000 heart attacks each year.

Part of the FDA’s responsibility to the public is to ensure that food in the American food supply is safe. Therefore, due to the risks associated with consuming PHOs, FDA has issued a Federal Register notice with its preliminary determination that PHOs are no longer “generally recognized as safe,” or GRAS, for short. If this preliminary determination is finalized, then PHOs would become food additives subject to pre-market approval by FDA. Foods containing unapproved food additives are considered adulterated under US law, meaning they cannot legally be sold.

If FDA determines that PHOs are not GRAS, it could, in effect, mean the end of artificial, industrially produced trans fat in foods, said Dennis M. Keefe, Ph.D., director of FDA’s Office of Food Additive Safety. FDA is soliciting comments on how such an action would impact small businesses and how to ensure a smooth transition if a final determination is issued.

Trans fat wouldn’t be completely gone, Keefe noted, because it also occurs naturally in small amounts in meat and dairy products. It is also present at very low levels in other edible oils, such as fully hydrogenated oils, where it is unavoidably produced during the manufacturing process.

PHOs are found in many popular processed foods, including some frozen products and baked goods. They have been widely used as ingredients since the 1950s to increase the shelf life and flavor stability of foods.

But over time, various studies have linked trans fat – produced when hydrogen is added to vegetable oil to make it more solid – to heart disease. A 2002 report by the National Academy of Science’s Institute of Medicine found a direct correlation between intake of trans fat and increased levels of low density lipoprotein (LDL) cholesterol, commonly referred to as “bad” cholesterol, and, therefore, increased risk of heart disease.

Keefe says that even though the FDA requirement that trans fat be listed on the Nutrition Facts label took effect in January 2006, consumers took the health warnings to heart early. They started turning away from foods with trans fat soon after publication of FDA’s final rule in 2003. Taking the lead from consumers, many processed food manufacturers followed suit and voluntarily changed their food formulations to reduce or eliminate trans fat.

However, Mical E. Honigfort, a consumer safety officer at FDA, says that trans fat can still be found in such processed foods as:

Under section 409 of the Federal Food, Drug, and Cosmetic Act, any substance intentionally added to food is a food additive subject to pre-market approval and review by FDA, with some exceptions. The exceptions include GRAS substances, because they are generally recognized by qualified experts as safe under the conditions of intended use. 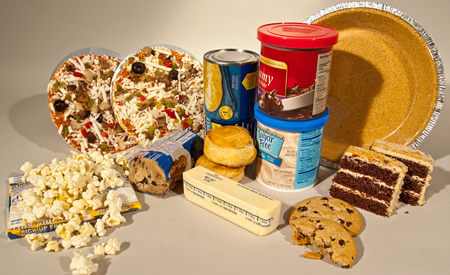 The most widely used PHOs have long been considered GRAS ingredients by the food industry. Keefe explains that companies may voluntarily notify FDA that they have determined that the use of an ingredient is GRAS, but there is no legal requirement for food manufacturers to submit a GRAS notification before going to market. If FDA ultimately determines that PHOs are not GRAS, food manufacturers would have to obtain pre-market approval by FDA before adding PHOs to food.

If FDA makes a final determination that PHOs are not GRAS, the agency and food industry would have to figure out a way to phase out the use of PHOs over time. To help address this concern in an appropriate manner, the Federal Register notice calls for comment on how long it would take the food industry to phase out its use of PHOs.

Meanwhile, the Washington, DC-based Center for Consumer Freedom (CCF), a non-profit lobbying firm that work on behalf of clients in the food and drink business, as well as other industries, is mobilizing to fight the proposed ban.

“Government paternalism is frustrating, especially when the government blurs the line between unhealthy and unsafe […] No one says that trans fats are a health food, but that doesn’t mean they need to be effectively banned from the food supply,” said J. Justin Wilson, senior research analyst at the CCF.

“The trans fats decision is a dangerous precedent for food freedom,” added Wilson. “Even worse, the regulation is unnecessary. It’s actually fairly difficult to even find foods with significant quantities of partially hydrogenated oils, even without a ban. Consumers demanded that food companies replace trans fats, and companies delivered.

“They delivered not by playing the activist ‘organic or death’ game, but by improving food technology. The whole reason that trans-fat-free cooking oils that don’t contain saturated fat exist is because Monsanto developed a genetically engineered soybean that produced a healthier, shelf-stable cooking oil.”

Issuing a statement on the FDA trans fat ban proposal, the Washington, DC-based Grocery Manufacturers Association said, in part: “Through our efforts at product reformulation and the development of suitable alternatives, trans fats that are not naturally occurring have been drastically reduced in the food supply.  Since 2005, food manufacturers have voluntarily lowered the amounts of trans fats in their food products by over 73%.

“Consumers can be confident that their food is safe and we look forward to working with the FDA to better understand their concerns and how our industry can better serve consumers.”

“The restaurant industry is committed to taking a proactive role in addressing today’s food and healthy living challenges, as evidenced by the tremendous strides the industry has voluntarily taken to reduce or eliminate artificial trans fats from menu items,” said Joan McGlockton, vice president of industry affairs and food policy for the National Restaurant Association, which is also headquartered in Washington. “We plan to discuss the impact of this proposal on the industry and submit comments, and we will continue to work with our members and the manufacturing supply chain to address any new federal standards that may arise out of this process.”

And what do consumers in the USA think about the trans fat controversy? According to results from a recently conducted Pew Research Center survey, a majority of Americans oppose rules prohibiting trans fats in restaurants. Among 996 respondents, 52% were not in favor of a prohibition, 44% were in favor, and 4% expressed no opinion.