On the frozen confectionery front, Gelato Fiasco’s Ripe Mango Sorbetto was a big winner. As previously reported by FrozenFoodsBiz.com, the Brunswick, Maine-based producer received a 2016 Sofi Award for the retail product in the Ice Cream, Gelato and Frozen Treat category. The Specialty Foods Association, organizer of the competition and the show, handed out 28 top prizes across as many categories.

Not in the official running were plenty of other sweet treats that were winners among show-goers, judging by the smiles on faces of satisfied samplers who lined up to try innovative ice cream, other frozen desserts, gluten-free Asian entrees, bagel balls, gourmet biscuits and numerous other menu pleasers.

“We’re thrilled to see Brio recognized for its cutting-edge, better-for-you ingredients,” said Arnie Koss, co-founder of Honolulu-based parent Aio Foods, which has a second office at the premises of sister company Nutricopia, Inc. in Montpelier, Vermont. 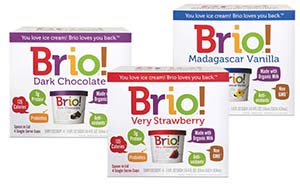 Promoted as “indulgent yet guilt-free satisfying desserts or smart snacks,” the premium products are made with organic whole milk from pasture-raised cows and non-GMO ingredients. Brio’s calorie count is “20% less than most brands and contains half the fat,” according to Koss. At the same time, the offerings are rich in antioxidants, protein probiotics, micronutrients and calcium, while delivering balanced Omega 3-6-9s in the bargain. 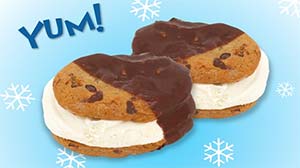 Joel’s Outrageous Ice Cream Sliders debuted at the show. The product is described by the Midland Park, New Jersey-based manufacturer as a winning combination of its popular butter-based chocolate chunk gourmet cookies stuffed with vanilla ice cream and dipped in chocolate.

“We want people to be able to enjoy one of the most quintessential summer treats in a guilt-free and easy version,” said founder Joel Ansh. 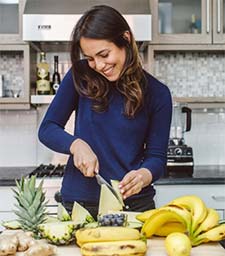 The refreshing product line, which is certified vegan, makes fresh juices more accessible to the masses because of its extended shelf life and affordability.

EatPops were created by a former law student who found herself craving sweets while studying for the New York City Bar exam late at night and into the wee small hours of the morning.

“I was constantly snacking. There were no juice stores near me, so I ended up freezing juice to make it last longer,” said Sophie Milrom, founder of the East Brunswick, New Jersey-headquartered company. 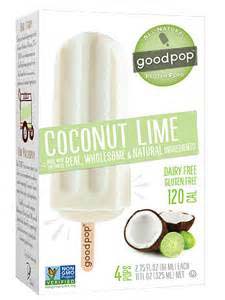 Another frozen pops specialist, GoodPop of Austin, Texas, brought a new tropical treat to the trade show floor with its latest Non-GMO Project Verified Coconut Lime flavor. Distributed in four-packs that retail from $5.49 to $5.99, each dairy- and gluten-free stick weighs in at 2.75 fluid ounces and has 120 calories.

The GoodPop enterprise was started in 2009 by then-college student Daniel Goetz at a farmers’ markets in the Austin area. Inspired by tasty frozen fruit paletas produced in Mexico, he created a range flavor combinations that include Watermelon Agave, Strawberry Lemonade, Hisbicus Mint, Banana Cinnamon, Coldbrew Coffee and Chocolate Milk.

“Coconut Lime is a fresh, new flavor that is perfect for the summer,” said Goetz. “As consumers demand more wholesome and clean products, we’re proud to offer frozen treats with only the finest and freshest ingredients.”

The GoodPop range is now available at over 750 grocery stores as well as natural food and specialty retailers in more than 40 states across the USA from the West Coast to New England. 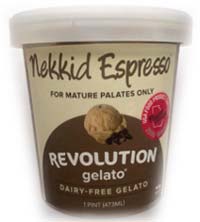 You say you want a revolution? Well, you know, luxurious dairy-free Revolution Gelato is promoted as a “have it all, delicious, healthier, planet-friendly dessert” for those who may or may not want to change the world.

In March Nekkid Espresso took first place among entries in the Flavor of Georgia dairy category competition. The annual contest is conducted by the UGA Center for Agribusiness and Economic Development.

The single-origin coffee is called “Nekkid” because it is processed using a natural “unwashed” method that retains the beans’ inherent sweetness. Full-bodied and flavorful, the coffee comes from an Atlanta micro-roaster whose family has been growing the beans sustainably in the mountains of Nicaragua for six generations.

While most gelato is milk-based, Revolution’s recipes primarily rely on organic cashew butter and coconut cream to replace traditional dairy ingredients. Founder Jared Olkin, who was a strategy and operations consultant at Deloitte for several years before starting the Atlanta, Georgia-based company in 2015, specifies only sustainable and ethically sourced ingredients for use in the product line, which is made by co-packers in Georgia and Florida. 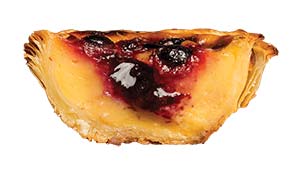 Having conquered the UK market, David Birkinshaw of Santa Monica, California-based Casa de Nata, a sister company of Galeta, an East London bakery, is on a mission to popularize Portuguese Natas in the USA.

“Passionate about spreading the word about this Portuguese egg tart delicacy, which originated in Lisbon’s Jeronimos Monastery during the 18th century, we believe our natas are amongst the very best in the world,” he told FrozenFoodsBiz.com.

Birkinshaw, who chose the Summer Fancy Food Show in New York to launch the line in the United States, is targeting both retail and foodservice wholesalers. Among Casa de Nata’s points of distribution in Britain are the Whole Foods Market chain of retail outlets, Selfridges department store, and Fortune & Mason, which is London’s oldest surviving fine food emporium and holder of a Royal warrant to the Queen of England. 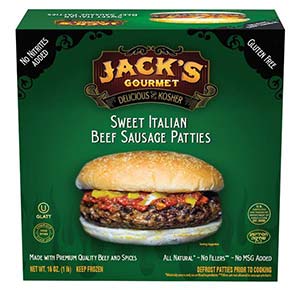 Distributed frozen in 16-ounce four-packs that sell for $10.99, each offering contains no gluten or MSG. Furthermore, there are no fillers, byproducts or artificial flavors in the ingredients.

Beginning as a small producer of authentic handcrafted deli meats and sausages in 2010, Jack’s Gourmet has grown to become a leader in minimally processed, superior quality kosher meat products.

“Our products are gluten-free, not because it’s trendy, but because we don’t use any fillers,” said CEO and Co-Founder Jack Silberstein, a graduate of the Culinary Institute of America. “From premium cuts of beef and poultry to fresh garlic to whole spices, our belief is that what you use is as important as what you don’t use.”

Reuben with Sauerkraut Mini Crescents, brand new from Giorgio Foods, were unveiled at the show. In addition to corned beef and cabbage, the pastry dough crescents are accented with Swiss cheese and mayonnaise.

The Taipei, Taiwan-based Namchow Group rolled out ready-to-bake Chinese Radish and Spring Onion delicacies at the show. Other frozen products in the company’s line, which is promoted in the USA by Astoria, Queens, New York-based Water Lilies Fine Asian Cuisine, include an extensive range of noodles, cooked rice and dough.

If it’s Feel Good, Eat it

Five years ago, after frozen dumpling samples sent to a Whole Foods Market store were favorably received, the entrepreneurial husband and wife team started a frozen food production and marketing business. Today their growing product line is available in over 45 states and more than 2,500 locations nationwide.

“We are now targeting the United States market with this product, which is already selling well in Europe,” said Isabel Lein, key account manager.

Also on the stand was Isabelle Nojac, co-president of the company, who believes that Frima’s Belgian Chocolate-filled Toasted Pastries could fare well with US consumers. Featuring a leak-proof wheat-based wrapper, the heat-and-eat treat can be prepared in a home toaster as well as in a conventional oven.

With a frozen food pedigree that dates back to 1947 – including more than 20 years under ownership of McCain Foods before being sold to two independent entrepreneurs in 2009 – Frima’s wide assortment of products ranges from panini and pizza to molleux au chocolat, waffles, soups, pastas, chicken curry, seafood ready meals and more. 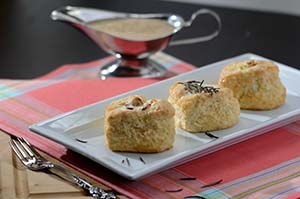 Based in the Washington, DC area, her online bakery business features 50 sweet and savory heart-shaped buttermilk-based biscuits. In addition to a thriving e-commerce distribution platform that ships frozen biscuits to customers throughout North America, the product line is available at select retail stores including Whole Foods Markets and Wegmans in the US Mid-Atlantic region.

CEO Riley, affectionately known at the “Biscuit Boss,” says that the Mama Biscuits crew “believes in getting back to the basics by making premium all-natural foods with only the finest, freshest ingredients that taste good. Period!” 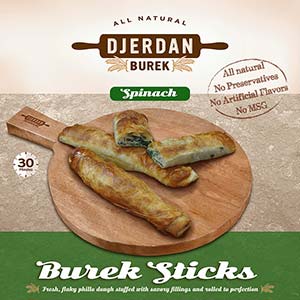 The family-owned company, started by Bosnian refugees who brought “old country” recipes to their welcoming new home in the USA during the 1990s, operates several restaurants in New York and New Jersey as well as the industrial bakery.

“Our mission is to introduce fillo dough Burek pies, a main staple food of the Balkan region for centuries, to mainstream national food markets,” said Selma Medunjanin-Ismajli. “Using traditional methods of production and the freshest ingredients, we intend to establish burek pie as a healthy and unique option for all – adding to our melting pot a bit more flavor, one fillo dough layer at a time.”

With 2,670 exhibitors from 56 countries filling the halls of the Jacob Javits Center, the 2016 edition of the Summer Fancy Food Show was the largest since it was established in 1954. More than 47,000 specialty food professionals and visitors toured the premises, which spanned the equivalent of six football fields. – Reported by John Saulnier