The iconic Jolly Green Giant, synonymous with frozen vegetables in the United States for generations, is back on the TV screen in a big way today. Humorous commercials created to communicate how easy and convenient it is to serve and enjoy prepared roasted veggies, mashed cauliflower and other healthy-eating side dishes at home began appearing on The Food Network, Bravo, Nick at Nite and other channels on January 2.

“The Giant Awakens (And He’s Got Big Things in Store),” a $30 million media program launched by brand owner B&G Foods, debuted in cinemas last autumn with minute-long teasers projected as previews of coming movie attractions to unsuspecting viewers. The mystery-shrouded trailer-style video did not reveal the giant’s face, but instead spotlighted reactions of awe among people gazing at tall shadows on skyscrapers or sizing up large footprints in farm fields. 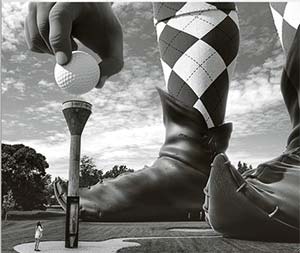 In a concurrent social media-savvy “Giant Road Trip” Instagram campaign, there was a glimpse of one of Mr. G’s colossal hands holding a selfie stick while snapping a photo, as well as a partial image of the behemoth teeing up a golf ball, and another shot of him reading a newspaper headlined “The Giant’s Coming Back.”

Now, at long last, the suspense is over as the animated mascot’s smiling face and bright green eyes have been unveiled in two entertaining 30-second television spots created by the Deutsch New York advertising agency.

One ad features the cool colossus in a wintry scene playfully making a mega snow angel on the ground. The heart of the second commercial portrays a woman sitting alone in a vintage Mustang convertible parked alongside a riverbank while admiring the big guy in leafy shorts wading in the water. As she toots the car’s horn and offers a “Hello Giant” greeting in a most welcoming way, the viewer can’t miss noticing a super-size pair of green boots not far from the car. 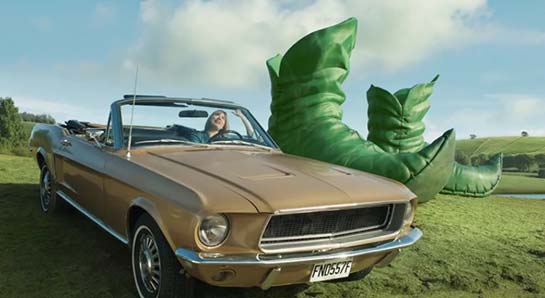 Meanwhile, a voice-over narrator advises that in addition to appreciating that jump squats really paid off for the Jolly Green Giant before his return to TV Land after a long journey to parts unknown, he also learned that “getting kids to eat veggies is easy when they really taste great.”

The “Snow Angel” and “What Did He Learn” commercials were cleverly crafted to nostalgically appeal to older folks who are positively familiar with the jolly “Ho, Ho, Ho” warm sell commercials created by Leo Burnett in the 1950s and steadily aired throughout the ’60s and early ’70s, while also striking a cheerful chord among their children and children’s children.

“I grew up with the Jolly Green Giant, and having the opportunity to reintroduce such an iconic advertising figure has been a thrill. It’s the giant we all know and love, but now in more modern, fun scenarios,” said Dan Kelleher, chief commercial officer of Deutsch New York.

For individuals and families keen on putting more greens into the menus of their daily meals, there’s plenty to choose from among Parsippany, New Jersey-headquartered B&G Foods’ Green Giant offerings.

“Since the acquisition of this iconic brand [purchased from General Mills for $765 million in 2015], we have been working tirelessly to meet consumer desire for new, delicious ways to incorporate more vegetables into their daily lives,” said Robert Cantwell, B&G’s chief executive officer. “This has inspired the creation of new Green Giant frozen innovations, as well as the brand’s modernized persona, with the intention of bringing back the Green Giant with a purpose – adding more vegetables to America’s plates.”