How Sweet it is: Häagen-Dazs Purple Potato Ice Cream

Autumn in Japan, why does it seem so inviting?

Not necessarily for the thrill of first nighting at the New National Theatre in Tokyo – at least not for lovers of sophisticated flavors of frozen confectionery. For them autumn spells the thrill and chill of again biting into delightful purple sweet potato Häagen-Dazs ice cream.

The Murasaki Imo flavor is now available for a limited time at ¥294 (approximately $2.86) per single-serve container in supermarkets and other retail outlets throughout the country. First introduced as a seasonal item in 2012 and making an encore in the autumn of 2013, the sweet treat has been absent from store shelves for the past three years. 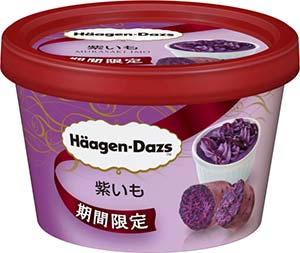 Having learned through consumer surveys that its Murasaki Imo ice cream ranks as the third most popular flavor among Häagen-Dazs customers in Japan, the company’s sales and marketing team decided that the time is right for a third appearance.