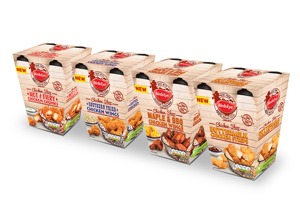 Chicken has long been a staple part of consumers’ diets in Europe and North America. According to the latest figures its popularity shows no sign of waning on either side of the Atlantic. According to the National Chicken Council USA, based in Washington, DC, consumers spend around $95 billion dollars on chicken annually. This number has grown steadily over the last two years. In fact, AVEC, the voice of the European poultry meat sector, reports that poultry is the most traded meat globally, highlighting the huge consumer demand for the protein.

Many high street food retailers, including UK retailer Iceland, are taking advantage of this demand for poultry by investing in own brand, value added poultry (VAP) product innovations to secure sales. 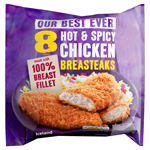 Global influences and street food trends continue to drive product innovation in the retail sector, meeting increased demand from consumers for a taste of takeaway at home that they can easily prepare and eat as an affordable treat for the family.

Birds Eye UK, a unit of Feltham, England-headquartered Nomad Foods, for example, launched a range of takeaway-style chicken last November under the Chicken Shop banner. The new range of sharing boxes contains pieces of chicken combined with a variety of coatings and marinades, including Buttermilk Strips, Hot & Fiery Chunks, Maple & BBQ Wings, and Southern Fried Wings, with an MSRP of £4.

“Chicken is incredibly popular at the moment because it’s tasty and versatile,” said Markos Papavlasopoulos, senior brand manager for Birds Eye Chicken. “We’re also seeing an increasing trend towards the informal eating occasion – ‘movie nights in with friends and family’ is a prime example. These occasions lend themselves to foods that are great for sharing, easy to prepare and can be eaten quite happily with your hands.”

Although frozen chicken penetration has reached its highest point in the last three years (66.8%), according to Kantar Worldpanel, there is a still plenty of scope within the sector for further growth.

“The two biggest penetration barriers for frozen chicken are low quality perceptions and a lack of relevant propositions for consumers,” stated Papavlasopoulos. “Our new range is perfect to address these tensions and add value into frozen chicken.”

Birds Eye’s Chicken Shop range has proved a hit with consumers impressed with the quality of the offerings. Additionally, the take out-style packaging encourages people to use the products during sharing occasions.

Also keen to cash in on the global food trend is Iceland, which offers a wide range of own brand VAP products. Consumers can choose from Southern Fried Chicken and Hot & Spicy Chicken Breasteaks retailing at £2 for a 760-gram bag, four Nacho Chicken Toppers for £2, or Let’s Eat American Buttermilk Chunks with Honey BBQ Sauce at £3 for 400 grams, to name just a few.

Finger foods and sharing platters are extremely popular with consumers and also tap into the street food vibe. Many manufacturers offer bite-size chicken products in a whole host of flavors and formats to appeal to consumers looking for a less formal eating experience at home. 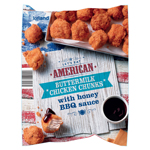 The public’s attitude to ethical issues changed significantly over the last five years or so, with fast food giants such as McDonald’s, Nando’s, Domino’s and Burger King in the spotlight regarding animal welfare issues. Consumers want more assurances that the food they eat has been responsibly sourced.

“There is no doubt that the public is taking an increasing interest in welfare and ethical issues,” said Bentley. “Witness the massive response to our plastics and palm oil initiatives last year, and the strong growth of our expanding, exclusive range of vegan products. We have always insisted on high welfare standards from all our suppliers, including those of VAP.”

Traceability and welfare are important matters to consumers, which is why the retail food industry is taking note. Suppliers now offer these assurances as standard, with many highlighting their credentials online.

Birds Eye’s website, for example, is clear about the fact that their birds are only treated with antibiotics if unwell and are reared in barns, never in cages. The company can trace chickens back to the farm from which they came, and assure that they were fed only quality vegetable-based feed.

“Consumers want to be sure that all animals being raised for food are treated with respect and are properly cared for during their lives,” said Tom Super, senior vice president, communications at the USA’s National Chicken Council. “The people and companies involved in raising chickens for food share the public’s concern. They recognize that they have an ethical obligation to make sure that the animals on their farms are well cared for.”

The value added poultry products sector’s growth can be attributed not only to the demand for convenience, but also to the improved quality of products. With big fast food chains like McDonald’s highlighting their 100% breast meat message, retail outlets have followed suit with private label products.

“Health and environmental concerns have prompted many people to cut back on processed meat,” said Alice Baker, research analyst at Mintel. “However, premium products can tap into the widespread ‘less but better’ mindset to support value growth.”

The demand for VAP products shows no sign of abating any time soon, which is great news for producers. However, the UK’s withdrawal from the European Union could have a significant impact on the EU poultry sector. Could this mean Brits are now stockpiling chicken wings, dippers and nuggets? Watch this space. – Reported by Sarah Welsh