This coming autumn, to commemorate the 50th anniversary of the 1966 classic animated television show, It’s The Great Pumpkin, Charlie Brown, a limited-edition Peanuts® Harvest Ice Cream Cake will be available in grocery stores throughout the USA. It will be produced and distributed by Buffalo, New York-based Rich Products’ I Love Ice Cream Cakes, in partnership with Peanuts Worldwide LLC.

With creamy vanilla ice cream and mini chocolate chips topped with orange and green icing, the special anniversary cake is being promoted as “a great way to watch the popular Halloween show when it airs for the 50th consecutive year in October, or to be enjoyed during Halloween parties or other fall celebrations.” 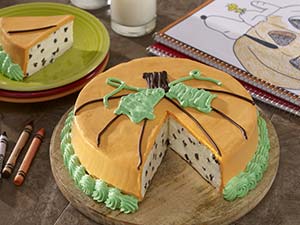 Priced at $14.99, the Peanuts Harvest Ice Cream Cake will be delivered to supermarkets and grocery outlets nationwide beginning in late September. It will stocked in the bakery or freezer aisles, and store location information can be found using the product locator at the ILoveIceCreamCakes.com website.

“It’s so fun and an honor to be a part of the 50th anniversary celebration for The Great Pumpkin, a nostalgic family classic,” said Nicole Owczarczak, senior marketing manager at Rich Products’ desserts, in-store bakery and deli division. “The fall is a great time to gather with friends and family, not to mention enjoy all of the Halloween activities that take place in October, so this special ice cream cake is a great way to celebrate!”

About I Love Ice Cream Cakes

The I Love Ice Cream Cakes range features a full portfolio of products in many different styles and sizes, including original Carvel, Peanuts, Hello Kitty and Jon Donaire, along with cookie-flavored OREO and Chips Ahoy! cakes.

The Peanuts characters and related intellectual property are owned by Peanuts Worldwide LLC, a joint venture between the Iconix Brand Group, Inc. (80%) and members of the Charles M. Schulz family (20%).

No doubt a number of those now graying 60-plus-year-old Boomers will celebrate the 50th Anniversary of The Great Pumpkin broadcast with their grandchildren by enjoying a slice or two of the special Peanuts-inspired ice cream cake.