The Boulogne-Billancourt, France-headquartered Carrefour Group is the latest Western company to cash in chips in East Asia’s biggest and perhaps most highly competitive retail food market. Others waving goodbye or dramatically scaling back in China include Tesco and Marks & Spencer of the United Kingdom, with Germany’s Metro AG reportedly keen on selling off a majority chunk of its PRC assets. Meanwhile, Walmart remains solidly in place with about 400 supermarkets open for business, and Aldi recently inaugurated two pilot outlets in Shanghai.

Failure to respond quickly enough to China’s e-commerce boom and ever increasing demand for rapid home delivery services from mega-millions of online shoppers are among the reasons cited by market watchers for sales declines in recent years. It was not until last May, through a limited number of newly opened Carrefour Le Marche stores in Shanghai, that digital innovations applied with the support of tech giant Tencent’s WeChat smart retail payment app were implemented in earnest.

Nanjing-based Suning.com Co., which is paying cash to buy an 80% stake in Carrefour’s China enterprise announced on June 23 for RMB 4.8 billion (approximately €620 million or $698 million), figures it has what it takes to reinvigorate Carrefour sales in the PRC. The French company’s receipts slipped 10% in the PRC last year to approximately €3.6 billion, with earnings of €66 million posted before interest, tax, depreciation and amortization.

Running the nation’s third largest B2C e-commerce platform and operating a network of 8,881 stores in more than 700 cities, electronics retail giant Suning.com is allied with online commerce titan Alibaba. The arch rival of Tencent bought a 20% stake its business via a $4.2 billion investment four years ago. In 2017 Alibaba purchased a 36% stake in China’s No. 1 supermarket chain, the Sun Art Retail Group.

With a presence in the PRC dating back to 1995, Carrefour China operates 210 hypermarkets and 24 convenience stores in the country, which equates to approximately 2% of the 12,300 retail shops flying its iconic red, blue and white banner in more than 30 countries around the world. Globally, it serves 105 million customers and employs over 360,000 people.

The Carrefour Group will retain a 20% stake in the enterprise and hold two seats out of seven on Carrefour China’s Supervisory Board. At any time during a 90-day period following the second anniversary of the initial transaction, Carrefour will have the right to sell the remaining 20% to Suning.com at a price equal to 20% of the equity value determined at closing of sale of the 80% stake.

According to analysis from Lydia Ling of Citigroup Inc., Suning’s valuation of Carrefour China at 0.2 times sales posted in 2018, in comparison with the industry average of 0.8 times, is a “significant discount to peers likely due to poor financial results.”

Bloomberg News quoted Hong Kong-based Pascal Martin of OC&C Strategy Consultants sizing up the recent trend in downsizing of positions and exposure among certain European and American players in the PRC market as follows:

“The big problem for Carrefour and other Western grocery chains is that they have major challenges in their home countries and can’t afford to grow in China. In China, if you want to grow in the groceries space, you have to continue to invest capital in less developed cities.”

Meanwhile, German discount chain specialist Aldi patiently waited two years before opening two outlets on June 7 in Shanghai’s Jing’an and Minhang districts. The pilot stores, which offer 1,300 products across 15 categories including frozen, can be customized and adapted specifically for the China market. 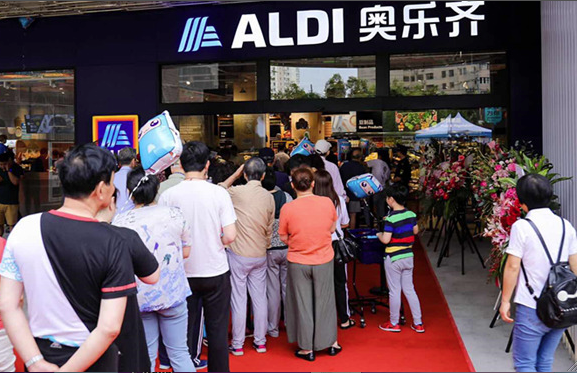 According to company’s website, this allows Aldi to “trial and test innovative retail strategies that bring better grocery shopping experiences to the local community, then nimbly adjust them according to data and feedback from customers.”

Elsewhere in the China’s largest city and financial hub, Japanese department store chain Takashimaya has announced that it will close its flagship outlet in Shanghai on August 25 discontinue all operations in the PRC.

According to a June 23 report published in the Nikkei Asian Review, the upscale, 40,000-square-meter store “has been losing money, and the Osaka-based company deemed a turnaround difficult as private consumption has slowed in China amid the trade war with the US. The focus of overseas operations will now shift to Southeast Asia, a region Takashimaya sees as more promising.”