Distributed in pint containers priced at no more than $4.99, a portion of receipts from each sale is donated to the Global Wildlife Conservation non-profit group, in collaboration with the 1% for the Planet organization. In support of another charitable cause, the company created Ice Cream for Acres in 2011, and to date the land conservation initiative has preserved nearly 130,680,000 square feet of land.

By combining USDA-stamped organic ingredients, including milk and cream sourced from family farms within a short distance of its two production plants, the company says it is “reinventing ice cream with fresh, creative, mouth-watering flavors.” 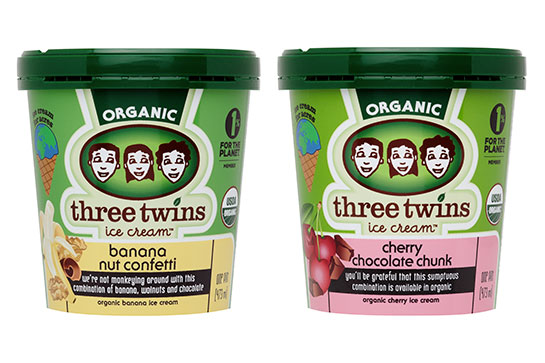 Neal Gottlieb founded Three Twins Ice Cream in 2005. At the time he was the company’s only employee, with no previous ice cream-making experience. Staked with $70,000 of personal savings and a $25,000 loan from his parents, the entrepreneur worked 90 hours a week at a single storefront in San Rafael, California. Five years later, Three Twins opened a 4,200-square-foot ice cream factory in Petaluma and rapidly increased distribution to hundreds of locations.

Today the company also operates four scoop shops in and around San Francisco, and employs nearly 100 people. In 2014 it opened a production facility in Sheboygan, Wisconsin, to meet increasing demand for organic ice cream in the USA.