Will Brexit Seachange Spark Reforms Among EU Bureaucracy in Brussels?

Traveling around northern Europe last week with FrozenFoodsBiz.com co-founder Malcolm Cameron, a British national, made for more politically charged conversation than usual in a pre- and post-Brexit referendum environment. This is not to say that the divisive subject totally eclipsed talk about football (how about Team Iceland!), the weather (far too much rain is threatening vegetable and fruit crop yields), and the overall frozen food business climate in general (it’s not bad at all, and equipment suppliers are benefiting from purchases spurred in part by continued low interest rates that are fueling investments to boost production and enhance efficiencies). 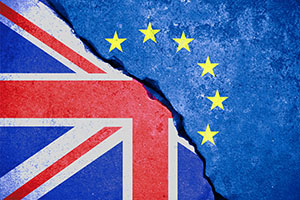 We kicked off the five-country road trip in Cologne on June 19 and 20 to commemorate the 60th Anniversary of the Berlin-headquartered Deutsches Tiefkühlinstitut (dti). A celebration marking the special occasion was held in the grand reception hall of the Flora Botanical Garden on Sunday night, followed by a conference at the Hilton on Monday that addressed a number of timely topics of interest to the frozen food industry. Hats off to Gottfried Hares, Dr. Sabine Eichner, Carola Herckelrath and other members of the hard-working DTI staff for organizing a well-attended event that was both fun-filled and educational.

Gutes essen, fine wine and, of course, cold Kölsch, were enjoyed at the party, where musical entertainment included amusing covers of hits from Tom Jones, Tina Turner and legendary rocker Freddie Mercury of Queen fame. However, the song on the minds of folks around our table, “Shall I Stay or Shall I Go” by The Clash, while not in the repertoire, was more in tune with the moment. The British punk band’s classic from the 1981 Combat Rock album bluntly asked the question that UK citizens would vote on four days hence.

Among its lyrics are: “So if you want me off your back. Well come on and let me know, should I stay or should I go. If I go there will be trouble, and if I stay it will be double.”

On Thursday, June 23, the people of Britain cast their ballots. As the pound sterling made appreciable gains in value leading up to judgment day, and the pollsters predicted a likely four point margin of victory for the “Remain” in the European Union camp, I went to bed that night expecting to wake up the next morning to learn that the UK would stay in the EU.

But that was not to be, as a 52% to 48% win scored by “Leave” proponents meant that, like it or not, June 24 was “Independence Day” for Great Britain. The margin of victory was approximately 1.3 million votes in an exercise of democracy that saw 72% of those eligible, or 33.5 million people, turn out to make their mark on history.

The “unexpected result,” which was identified by currency traders in the wee small hours of the morning after polls closed, sent sterling tumbling and triggered shock waves felt around the world. Share prices were hit hard as soon as stock markets opened for business.

While visiting a major frozen vegetable producer in Belgium last Friday, Malcolm Cameron received a “My Condolences” greeting from an old friend who knows the UK well both businesswise and culturally. He sadly equated Britain’s decision to leave the EU as akin to a death in the family.

An executive from another Belgian frozen food company, this one engaged in the value-added seafood sector, told us that all quotes made to British buyers and prospects prior to the vote have been taken off the table until a better understanding of the pound-euro-dollar exchange rate is determined. Indeed, almost overnight pricing in euros soared against sterling by double digits.

For the record, Malcolm Cameron of FrozenFoodsBiz.com, who voted to “Remain” by proxy, is not related to David Cameron. The prime minister spearheaded the losing “Stay” campaign, which was supported by established mainstream parties ranging from Labour and Liberal Democrat to Scottish National, in addition to the Tories. The PM has vowed to resign from the post in several months to allow a new leader to negotiate terms of building a revised trading and political relationship with Continental counterparts.

Meanwhile, bureaucrats in Brussels and a number of elected officials from countries keen on containing the potential contagion of the Brexit movement from spreading to other EU member states want to see Britain depart the European Union as soon as possible. Viewing the outcome of the referendum – which in effect was a rejection of the so-called “elites” who regulate the lives of more than 508 million people –as a messy divorce rather than a funeral, they will not be sending flowers to 10 Downing Street. 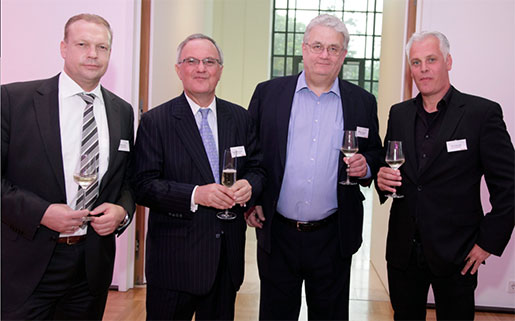 Enjoying drinks and conversation in Cologne during the 60th Anniversary of the Deutsches Tiefkühlinstitut, a frozen food trade association that incidentally was in existence prior to the founding of the European Union alliance, are (left to right): Dietmar Eiden, Koelnmesse’s vice president of trade management; John Saulnier, editorial director of FrozenFoodsBiz.com; Malcolm Cameron, co-founder of FrozenFoodsBiz.com; and Jacco van Laar of Eurofrigo and Global Retail Brands. Needless to say, the Brexit referendum was a hot topic of discussion.

“Go Now, Before You See Me Cry”

As a feeling of the blues gripped the psyche of “Stay” supporters and sympathizers, perhaps “Go Now” lyrics from another British band, the Moody Blues, are apropos:

The wheels will not start turning on the formal process of withdrawing from the EU until Article 50 of the exit clause of the Lisbon Treaty is triggered, and that is not likely to happen until a new prime minister is in place this October. Upon invocation, the departure period could last for up to two years.

French Foreign Minister Jean-Marc Ayrault has called on Cameron to resign right away, ostensibly so that economic stability can be secured sooner rather than later. The EU establishment also wants to clearly signal to other members of the now 27-member club who may be flirting with departure that those who stray from the pack won’t likely be allowed back, and will be forced to pay a stiff penalty for bolting from the 43-year-old alliance.

A rather impatient man is Jean-Claude Juncker, president of the European Commission, who will shed no tears when the UK is “gone now” as a player on the EU stage. Stating in no uncertain terms, “It’s not an amicable divorce, but it was also not an intimate love affair either,” he has called for divorce proceedings to begin “immediately.”

Chancellor Angela Merkel of Germany, on the other hand, has said that for the sake of preserving economic ties there should not be a “hasty” reaction to this watershed moment in history.

So, the wheeling and dealing will soon begin in earnest in Brussels. As it happens, one can only hope that major reforms will also be in the offing for the EU as a whole, otherwise the entire post-World War II economic and political framework in Europe could be at risk.

Consequence for the Food Industry
What does all this mean for the food industry?

If the pound stabilizes vis-à-vis the euro, there may not be much UK-EU trade fallout in the short term – especially for companies that have hedged their buying and selling positions. But further depreciation of both currencies against the US dollar will not bode well for spot market purchases of imported seafood and other foodstuffs, as such transactions are generally settled with greenbacks.

Additionally, an erosion of consumer spending power in Britain will have an impact that could see deep-discount retailers such as Aldi and Lidl further increase market share at the expense of the major multiples. Traffic may slow down for non-QSR foodservice operators for a while, as diners watch their wallets more closely.

On the other hand, a weaker currency could boost net exports – at least until tariffs are imposed to negate any pricing advantage for “outsiders” conducting business in a commercial zone that is longer duty-free friendly for them. 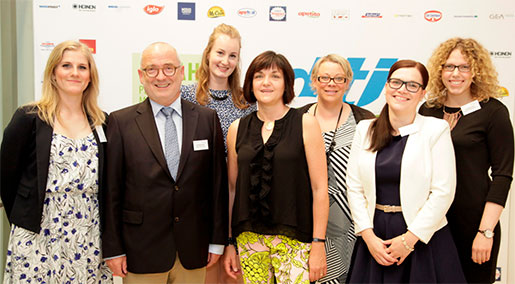 The EU bureaucrats in Brussels may be able to learn a thing or two about efficiency and accountability from the skilled Deutsches Tiefkühlinstitut team that put together a first-rate business conference and social gathering during the June 20-21 Tiefkühltagung 2016. Key personnel responsible for the successful event are (left to right): Lea Gründler, Gottfried Hares, Franziska Klette, Dr. Sabine Eichner, Carola Herckelrath, Annegret Martelock and Annette Ebert.

“The longer-term economic effects of a Brexit on the UK are unknown and unknowable, but it is not a guaranteed negative,” according to a market update posted by the PNC Financial Services Group. “The costs of Brexit would largely depend on the terms of British market access to the EU economy, an outcome of negotiations that have not yet begun. The potential economic benefit of Brexit is also as yet unquantifiable.”

Cool-headed Analysis from the Cold Front

A branch of the frozen food community with its finger always close to the pulse of change and upheaval is the cold storage sector. So I asked Derk van Mackelenbergh, managing director of Rotterdam, Holland-headquartered Eurofrigo, to comment on the situation.

“For our industry the effects will only come in due course, since nothing has happened yet other than the financial volatility. However, it could have a negative effect on import regulations,” he said on June 28. “I cannot imagine that Britain will change its food safety and other regulations built up by the EU, now that they are stepping out.”

Van Mackelenbergh stressed the importance of quick reforms at the highest levels of the EU to stave off additional departures from the ranks.

“The problem will be the leadership, or more precisely the lack of leadership,” he stated. “The EU needs to seriously deal with the refugee problem, the financial instability and last parts of the financial crisis. But above all, it must resolve problems within its own bureaucracy – for example, stop the moves between Brussels and Strasburg. Only when this happens will the danger of another exit be taken away.”

Indeed, there are growing nationalist sentiments and succession movements in a number of European countries, including France, the Netherlands, Belgium and Spain.

Meanwhile, Ian Wright, director general at the UK’s Food and Drink Federation (FDF), called the outcome of the referendum a “disappointing result for the food and drink industry,” since 70% of its members were in support of Britain remaining in the EU.

“Now FDF will work on behalf of our members and all those across our industry to find a way through this very challenging period that we face,” said Wright. “We’ll focus on working with the government to understand what this means for trading, market access and regulation to secure the best outcome for British food and drink manufacturing business and their customers.”

Good luck with that, assuming there will be a functional government to work with anytime soon. Should Boris Johnson win the Conservative party leadership election and take over as prime minister, it is expected that he will begin negotiating an exit from the EU without immediately calling for a general election.

One can’t help contemplate what Winston Churchill would say at a time like this. Probably something like: “Democracy is the worst form of government, except for all the others.”

God Save the Queen!