The Harrisburg, Pennsylvania, USA-headquartered National Frozen & Refrigerated Foods Association (NFRA) is going all out to celebrate America’s favorite dessert during National Ice Cream Month this July, and there are a lot of reasons to celebrate.

Plus, ice cream and novelties are a family affair and not just for those enjoying it. The majority of US ice cream and frozen dessert manufacturers have been on the scene for more than 50 years, and many are still family-owned businesses.

It’s no wonder NFRA’s Summer Favorites Ice Cream & Novelties promotion is bigger than ever. All over the nation, shoppers are finding promotions, special deals and signage at their local supermarkets throughout July.

And to make the month even sweeter, consumers have a chance to win free ice cream and novelties for a year. All they have to do is visit www.EasyHomeMeals.com to enter the giveaway.

•The top three flavors of ice cream in the United States are vanilla, chocolate and cookies ‘n cream

•Chocolate was the first ice cream flavor ever invented

•The world record for most ice cream eaten is 16.5 pints in six minutes, set by Miki Sudo

•Chocolate chips are the most popular ice cream topping

•The average dairy cow produces enough milk in its lifetime to make 7,500 gallons of ice cream

•The biggest ice cream sundae ever was created in Edmonton, Alberta, Canada in 1988. It weighed a whopping 24 tons

•Ice cream cones were invented at the 1904 World’s Fair in St. Louis, Missouri, by concessions vendors as a way for people to eat ice cream easily while they enjoyed the fair

•More than two billion popsicles are sold each year 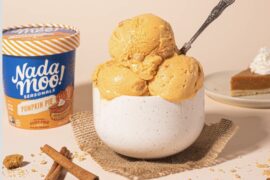