The “have grill, will travel” Lillie’s Q competitive barbeque team has mastered the art of Southern BBQ, having racked up first place wins at the “Memphis in May” World Championship Barbeque Cooking Contest in 2007 and 2016, along with Top Ten placements over five consecutive years. On each occasion its main ingredient, Duroc pork shoulder from Compart Family Farms, was smoked with peach wood for hours until achieving optimum flavor. 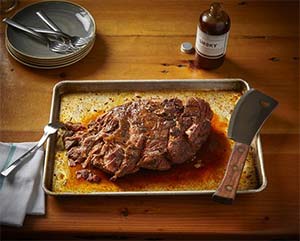 This Smoked Pulled Pork offering from Lillie’s Q is enough to feed 10 people.Offered at $55, the Lillie’s Q Smoked Pulled Pork package can serve up to 10 people. The product is frozen and vacuum-sealed to retain peak flavor and freshness. Each order includes a choice of one of Lillie’s Q signature barbeque sauce flavors – either Hot Smoky, Smoky, Carolina, ENC, Gold or Ivory.

“We’re immensely proud of our team’s smoking technique, which my dad Quito and I began mastering when I was just a kid in Greenville, South Carolina,” said Charlie McKenna, founder and chef at Lillie’s Q flagship restaurant in Chicago. “We’re pleased to bring this to more tables across the USA and are confident it will impress even the most discerning carnivores and barbeque aficionados.” 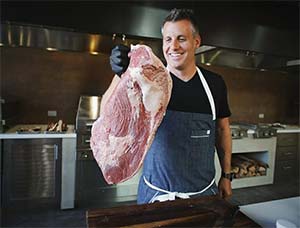 Chef Charlie McKenna, a graduate of New York’s Culinary Institute of America, has won numerous awards on the BBQ circuit, including two first place finishes at the “Memphis in May” competition.McKenna is the only pit master in America who can boast two “Memphis in May” first place finishes as well as a range of international sauces and rubs and multiple restaurants, including four Lillie’s Q outlets and the LQ Chicken Shack. Since launching in 2010, Lillie’s Q products have offered flavors of the south including spicy cayenne from Memphis; apple and lime juices from Western Carolina; vinegar from Eastern Carolina; tangy mustard from South Carolina; and black pepper from Northern Alabama, among others.

The restaurant group, Southern Revival Hospitality, aims to bring the evolution of Southern cuisine and culture to populations near and far. Having already expanded its sauces abroad in countries including the United Kingdom, the Netherlands, Germany and Australia, Chef McKenna is bound for the Emerald Isle toward the end of May to introduce his BBQ technique to Tesco stores in Ireland.

Meanwhile, the company will soon be flying high with Sea Salt & Pepper available aboard United Airlines and a new chip (or crisp, as the British say) flavor, Buttermilk & Sweet Onion (sort of a Southern take on Sour Cream & Onion), in stores.